One of the great things about the ad we were in was the set. The Stonehenge replica we posed in had to be simple but it was still thoughtful. When we asked about it at the shoot we learned the makers were already gone. But good news! Our contact at the ad agency has gotten us the detailed explanation below from Production Designer Dylan Kahn. This is awesome! Many thanks!

(Markings in brackets in bold are ours and lead to footnotes below.)

Here’s basically how we pulled that thing off ..
I put a few images together that show the process

After I shared a bunch of research images of the real Stonehenge with Megaforce we then went and look at all the Clonehenge stuff together on FB[*] and google we could find.

Once we decided what we wanted to do , I built a 3d model of the pieces to help the set shop and I determined which shapes I liked best and thought would read easiest 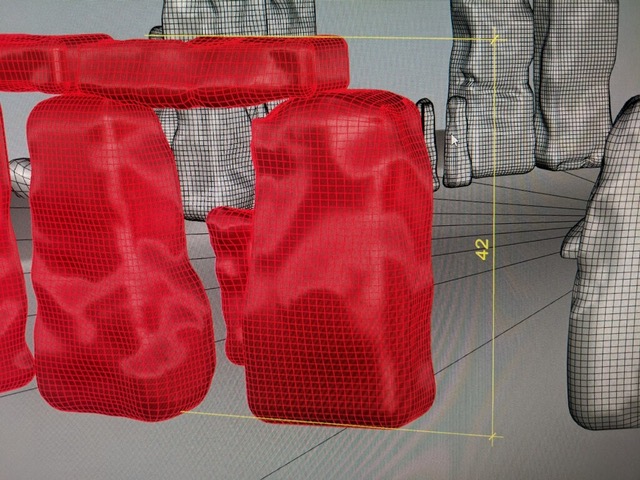 From there I had the shapes carved in Beadfoam, the sculptors at vision scenery did that for us …using the reference and model as a guide

We then had those approved by MF for size and scale …

Heres a pic of me and the Alicia our Paint / sculpture foreman in front of them that we shared for size. You can see we numbered and then carved each trilithon as close to the model and real shapes as we could…so they were as close to the real thing as possible.

Knowing that they would be seen by not only the Clonehenge FB group people but more importantly[???] an additional 100 million Super Bowl watchers …

Following approvals from MF i then had them coated in concrete…we used the quick setting stuff that comes in 50lb bags. We troweled that on and kept it as rough as possible.

Once that was dry, I had them put a white wash on some of the stones and then a solid gray each on the others so it looked as though some were not yet dry, as MF wanted the vignette to show the group mixing cement and making them.

All in all they turned out great !

In the end we donated them to EcoSet and im sure they’re still there as they’re pretty specific not really recyclable.

I’m glad we had the chance to make something so fun and couldnt have done it without Vision Scenery, Alicia and Raymundo there!
So stoked to work With MF and Wieden to make something that challenged us all in so many ways
I hope this helps explain how we did that
Thanks
Dylan

Notes: MF above stands for Megaforce. Wieden is Wieden and Kennedy, the ad agency responsible for making the ad.
Our own footnotes:
[*] Yay!
[???] Say what????

There it is. We wouldn’t be Clonehenge if we weren’t curious to learn how replicas are made. This process was fascinating to us. As to the thinking behind including us in the first place, that of course remains an utter mystery!

Our thanks to Maureen Doyle (for many things!) and Jewel Estephanos for getting us this information. And to everyone who had anything to do with the creation of the ad, especially all of the lovely people we met and were in touch with during the process.

Who knows what will happen with Clonehenge next! But until next time, friends, happy henging!

The tale we are about to tell you may sound unlikely or even fictional, but in this strange alternative universe to which we have somehow been transported it is 100% true.

In December, a few days before Christmas, I and a small cohort of the Clonehenge faithful (Simon Burrow and Paul Stoffels) were flown, all expenses paid, to L.A. and put up in a swanky Hollywood hotel for two nights. Another member of the Clonehenge: Stonehenge replicas Unleashed Facebook group , Siobhán Jess Sarrels, lived closer and was brought in by limo to meet us the next day where we were ushered into another limo and driven to the site where a set including a small Stonehenge replica had been prepared.

There we were led to a big trailer which was ours for our time there. We were visited by wardrobe and makeup people, met some of the people who had been instrumental in bringing us there, and went to the set. We ended up spending most of the day doing a shoot along with some very genial actors meant to appear to be Clonehenge group members. The main acting direction was to “look badass!” One does what one can.

What we did not know that day (it was at winter solstice, although we were led to believe that this was a coincidence) was that our shoot was to be part of a Super Bowl commercial (advert, ad, whatever word you prefer). On 02/02/2020 it aired. For a brief instant, the name Clonehenge: Stonehenge Replicas Unleashed!, some very good friends of Clonehenge, and the person typing these words—the redhead with the dark glasses*—appeared before a huge audience of American football fans. At last glance, the video of the ad on Youtube alone has had almost 22 million views. Whether they were all me watching it over and over again will remain undisclosed.

Apparently, at least judging by the soundtrack of the video, whether we at Clonehenge headquarters know it or not, we want to rock. This is new information and we are now attempting to assimilate it into our worldview. The effort is ongoing.

At any rate, the whole thing has been a glorious adventure. Not only have 200 new members joined our Facebook group, bringing us over the 500 member mark, but this along with a radio interview we did on Australian Broadcasting in Sydney on the same day the commercial aired brought this blog’s stats up to near record levels.

To be honest, we had always expected to labor over this topic in obscurity until the end of our days, so this all comes as a bit of a shock. We can only assume that having had the 15 minutes of fame granted to everyone by Andy Warhol, we will now be able to crawl back under the rock from which we briefly issued and continue searching out Stonehenges in all the places where we all, frankly, know they should not be. In that sense, come to think of it, perhaps we do want to rock.

We hope to resume our slow listing of large Stonehenge replicas worldwide in the next post. It is likely to be posted with the same grace and lightning-like speed to which readers have become accustomed.

Thank you for finding us or for sticking with us all these years. Until next time, gentle readers, happy henging!