All of you master hengers out there, your hour has come! This will be a short post, but the length does not reflect its importance, only our laziness!

The contest will be held on 8th July, 2018, in the Wiltshire village of Shrewton. A note to irreverent Americans among us: yes, town names like this are real and historic and were not, as you suppose, invented by fantasy writers! The town, for example, is not populated by little shrews in vests and dresses.

That said (we continue a bit sheepishly), there will be several cricket matches, traditional games, and music from the time of the gifting of Stonehenge to the nation, that is, 1918, and the Shrewton Silver Band.

Yes, we concede, it does all sound a bit like the Shire or some kind of England theme park, but please put all that aside. BECAUSE THE POINT IS, friends, THERE WILL BE A HENGING CONTEST!!!! With prizes! See the diagram above.

Please note there is a size limit. No henge shall exceed the maximum diameter of 300mm, which is slightly less than 12 inches. This seems small, but great things can be achieved in small packages!

Prizes include a Stonehenge book and a Stonehenge bag, and an actual model of Stonehenge for the adult winner. (Stonehenge replicas are far too addictive to be given to children as it could turn them into those useless kinds of people who think about Stonehenge all the time and are always thinking up new theories about it or arguing about old ones. Society does not need any more of those. Trust us on this! Take us as an example. Say no more.)

Below is the poster for the Stonehenge Chubb Centenary Day. Note how it is not at all stereotypically English. Not even a bit. You are not required to dress like that, incidentally, but let’s face it—you’ve been dying to and here’s your chance!

We at Clonehenge urge you to build a henge, accurate or quirky, simple or elaborate, and take it to Shrewton on 8th July to celebrate the gifting of Stonehenge by Sir Cecil and Mary Chubb to the nation! Encourage friends and children to do the same. SWAMP the judges with little Stonehenges! Make your friends at Clonehenge proud. We’ve already asked for pictures of the henges and judging so that we can post them here and on Facebook and Twitter afterward.

Oh, should you meet a certain Mr. Edwards there, do ask him about his experience making the experimental cheese puff henge! He will not try that again. Quite amusing.

And so, until next time, gentle readers, happy henging! 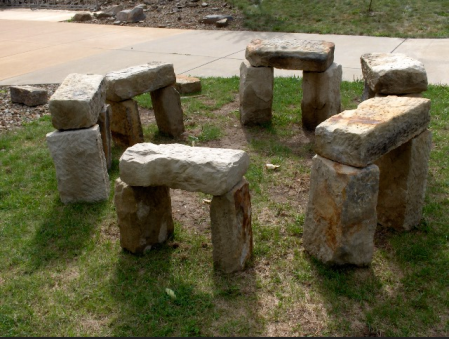 An assemblage of trilithons at Oberlin College, November, 2008. Photo by Jonas Wisser This was the Clonehenge blog’s first posted henge!

Well, we were trying to do at least one post per month, but somehow May got away from us and now we’re well into June. Our inability to meet blog deadlines will come as a surprise to no one who has been paying any attention here. Ah, that wonderful deadline whooshing sound!

But part of the delay has been us trying to think of any method at all by which we could make this long-planned post anything less than a snooze fest. The bad news is, we have come up with nothing. The good news is, you should probably all be getting a lot more sleep anyway! So here goes.

The variety and number of constructions that can still fall under the topic of this blog—replicas of Stonehenge, in case some poor soul has stumbled in unawares—is great. There are so many potential variables that it’s impossible to put them in neat categories. Some broad categories, however, are:

One trilithon: two standing stones with a third set on top, connecting them. This is visual shorthand for Stonehenge and it doesn’t seem to matter if the stones are the right shapes or proportions or even if the lintel, that is, the one across the top, extends out past the upright stone on either side so it looks more like the mathematical symbol for pi. This is the classic glyph for Stonehenge, the most obvious example being the famously small trilithon in the movie This is Spinal Tap.

Then there is the classic grouping of a single, or sometimes two trilithons with accompanying standing stones. You see this most often in garden henges, especially larger ones. Trilithons are trickier to make than you would think, so maybe after going to that trouble, the henger decides many won’t be necessary, or maybe they prefer the simpler look. Maybe some of each.

A classic garden henge, with two trilithons and some standing stones—Cleveland, Ohio

Next is the assemblage of trilithons, (see top of post for photo) including the classic (but inaccurate) foodhenge, the circle of trilithons. We see these so frequently that we’re convinced that many people think this is Stonehenge’s real form. There are certainly some people who build these and call them henges even once they know the difference. Many of these include something in the center. Sometimes something very odd. As in the accompanying WotsitHenge by Jo Kendall with central small ducklings. 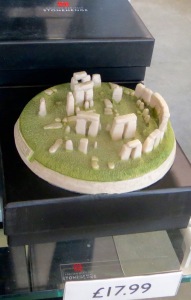 Stonehenge more or less as it is now

From there it becomes more complicated. Do you intend to recreate Stonehenge as it was thought to be at its height or Stonehenge as it is now? And which of the many many elements that make up Stonehenge and it’s landscape will you choose to include? The Heel Stone? The Station Stones? The so-called Slaughter Stone? The ditch and bank? (Which after all, is what makes it a henge. Sort of. But not actually, because Stonehenge’s ditch and bank are not quite right for a henge. The sad truth is, in the truest sense of the word henge, Stonehenge is not a henge. This is the sort of knowledge that separates the Stonehenge nerds from actual human beings.)

Stonehenge more or less as it is thought to have bee

But we digress. There are other elements. Do you include, as some have, the dagger and axe carvings on the stones? The Aubrey Holes? The avenue? Remnants of old graffiti? The fence? The tourists? The jackdaws? The sheep?? How closely do you model each stone to the shape of the corresponding real stone? On the famous Transformers replica, someone carefully copied the pattern of lichens on the stones! And a Kickstarter project called BuyStonehenge has gone to even more minute detail than that. Check it out! 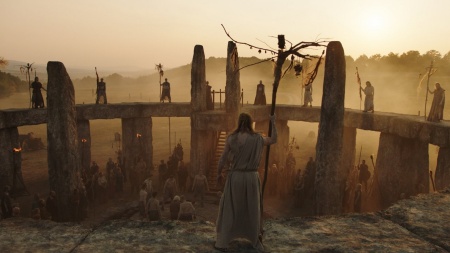 Stonehenge in the show Britannia is a sort of Super Stonehenge, with many exciting added features, including a raised platform and carved stones! (honestly not sure of the source for this photo, but we didn’t take it)

And what of the people who like to go beyond the real Stonehenge when they make their replicas? The ones who add dinosaurs or aliens or both? We’ve seen a small Stonehenge that included the full ring of lintels, but added train tracks on top and ran a train around it. We have seen more than one model that uses the form of Stonehenge as the foundation for a roofed building. We’ve seen elaborations that include carvings on the stones and a mighty platform from which priests and leaders addressed gathered peasants. Stonehenge Improved is a big category that seems to imply that Stonehenge isn’t good enough just as it is, but we must admit, many amusing henges fall into that category!

There is also speculative history. Were great colourful hangings once put over the stones on great occasions? Were people or animals once sacrificed within the circle? Was there at one time a hedge around it? Was Stonehenge in fact, as some have said, never completed? How were the stones brought there and lifted into place? Every possibility suggests a diorama.

Stonehenge stone #56, photo by Simon Banton, from his blog at this link

Theoretically, even a single stone could be considered a Stonehenge replica if it is an exact scale replica of a recognisable stone—take Stone 56, for example. Many of us would recognise a good copy of that one!

The point is, the definition of what is a Stonehenge replica is wide, but not all-inclusive. A mere circle of standing stones is not a Stonehenge replica. But many various things can be. As you build your henge, don’t be afraid to include some little authentic detail, as in the case of the snowhenge we saw that included the axe and dagger carvings. Little touches mean a lot! Don’t settle for that lowest common denominator, the circle of trilithons, unless you have embraced it as your style. Anyone can do those. You be you!

We haven’t even covered here, the other henge variations, those of size and materials, and location. Factor those in, and the possible varieties of Stonehenge replicas seem to be endless. No wonder no two look alike!

Do we promise you a more interesting and exciting post next month? Heh. Surely you jest! We’re hoping for an interview with a long-winded scholar, it seems. But we’ll post memes with it or something! Maybe cats!! We know what you cool people like in this modern era of, you know, the interwebs, phones, and selfie sticks, and whatnot! We’re hip like you, fellow kids!!

But now until next time, gentle readers, we wish you dreams of new kinds and sizes of henges! And as always we wish you happy henging!

*All photos by the author of the Clonehenge blog unless otherwise noted.