We bring you this youthful venture in the series-of-trilithons tradition, our second sconehenge (see the first here).  We can’t determine from the article if the young henger, Mathew Growcoot, baked these scones or bought them, not that it matters a great deal. He’s an artist, not a baker.

It looks very much as if he originally set up a circle of trilithons and then two trilithons fell over or were pushed. Recognition of the fallen stones is good. On the other hand, too bad the scones were anchored with toothpicks. We would have awarded an extra druid if it had been by mortise-and-tenon in the manner of the original.

But, alas, although we appreciate the lad’s intention and enterprise, it is difficult to award a high score for a circle of trilithons. This is what we might expect from an American student who never looked twice at a Stonehenge photo, not from a Liverpudlian who must surely have learned a bit about Stonehenge somewhere along the line!

Still, we must encourage youthful henging. (And we do appreciate how, in this picture, he is subtly using his head to represent the rising of the sun!) Score: 5½ druids. And negative druids for the writer and his “half-baked” and “piece of cake” puns. Come on, man–some of us eat while we read!

Of course, winter solstice may have been the big one in the days of the builders, but it’s not as fun to party in that weather.

Oh, Seattle, how we love you! From Washington State once again we bring you Stonehenge, this time in a tiny form. It is advertised by Two Thumbs Miniature Garden Center (Grow Your Own World). Their company policy: “If it’s not fun and cute,we don’t want anything to do with it!” And what’s more fun and cute than Stonehenge?

Janit from Two Green Thumbs tells us she used the mini-Stonehenge from Running Press, drilling and staking the pieces so they would stay in place. She adds that she has “since told countless other mini gardeners how to make their own. I suspect there are dozens in and around the States!” We don’t doubt it. We laud her for helping would-be hengers to realise their aspirations! And it is kind of cute, isn’t it, although we feel an urge to go in and add a bunch of fallen stones. You could always buy a second kit and fill in a little.

Leave it to the Stonehenge State to make it possible to put a henge in every pot! Score for this simple but charming take on the replica: 7½ druids, despite the lack of bluestones. Hurry–you still have time to set one up for solstice!

photos by Pete Glastonbury, with permission

When we left you in the previous episode, Clonehenge was in the Wiltshire Heritage Museum examining the remarkable Britton Cabinet. Today Director David Dawson has kindly opened a drawer to show us the detailed Avebury model inside. Wow!

To refresh your memories, we have posted Avebury models before, of varying degrees of detail and accuracy, all, as it happens, found for us by the formidable Pete Glastonbury, champion of Wiltshire. One was lovely, but just the circle;  one was, well, clever but rudimentary; and the third, while it covered a good area and included Windmill Hill, which is a plus, lacked the crucial element of stones.

Compared to those, this is more like a William Stukeley drawing of the site in 3-D, and in fact it includes a drawing of Stukeley’s serpent interpretation of the Avebury landscape at the bottom.

Stukeley proposed that the avenues of standing stones, now called Beckhampton and West Kennet Avenues, originally combined with the Avebury circle to form a glyph of a serpent passing through a ring, a traditional alchemical symbol. The head was formed by a circle now called the Sanctuary, alas devoid of stones in modern times, but once a double stone circle.

This model’s scale does not allow the entire “serpent” to be shown, so along with the drawing, it includes small models of the stones that make up its head and tail. Was a serpent really the builders’ intention? Hard to say, but the idea is the darling of those who strive to link megaliths and ancient sites around the world. It is certainly the kind of fancy that draws new people into the world of the megalith. Mind you, Stukeley was a brilliant observer, but he thought Avebury was a druid temple. ‘Nuff said.

Score for this Avebury replica: 9 druids. The only way you could improve upon it would be to make it much larger and show more of the landscape in scale: West Kennet Long Barrow, Silbury Hill, Windmill Hill, etc. It’s a delectable morsel for the megarak’s eye. Still, even that can’t prepare you for a walk among the stones themselves! May we all get that chance in our lifetimes.

photos by Pete Glastonbury, with permission

The plaque on this cabinet in the Wiltshire Heritage Museum reads:

“The Britton ‘Celtic’ Cabinet [Clonehenge thanks whoever is responsible for those single quotation marks!] The cabinet was originally made in about 1824 for G Watson Taylor, MP for Erlestoke. It is made in the shape of one of the trilithons at Stonhenge [sic], with pollarded elm and birds eye maple veneer, and contains inset watercolours by contemporary artists including Cotman. By 1832 it had been acquired by the historian John Britton (1771-1857) and stood in his library, where it housed manuscripts and drawings. It was bought by the Wiltshire Archaeological and Natural History Society in 1853.” 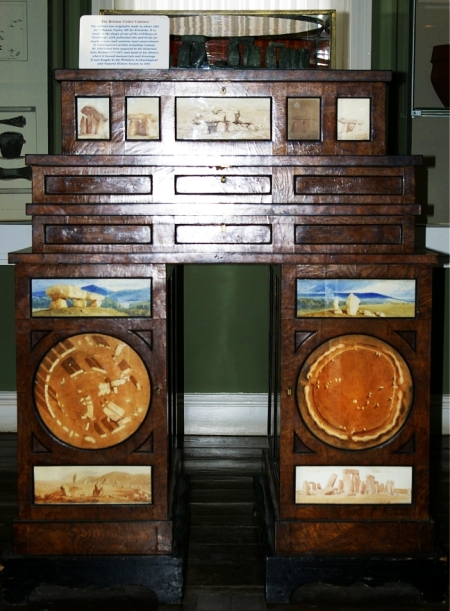 The replica at the top of this post, seen in glass on top of the cabinet, is one of the cork models by Henry Browne, whom we have mentioned before. On the left side of the ‘trilithon’ you can see a charming watercolour of an aerial view of Stonehenge. A similar picture of Avebury is on the right. The other painted panels are hard to make out, but the bottom right is Stonehenge again. Others seem to represent a concession that Wiltshire doesn’t own the megalith franchise.

This is an absolutely fabulous bit of megalithia, in our not-all-that-humble opinions. So much so that we are giving the Avebury model inside the cabinet a post of its own, to follow in a few days.

Score: 8½ druids. It might have been 9 if it weren’t for that word Celtic in its name. Our thanks to Pete G. for bringing this amazing item to our attention!

It’s a few years old, but this firewood henge caught our fancy when we discovered it, so we’re bringing it to you.

The commentary for the second photo reads: “As in stonehenge, the pillars and idols of Woodhenge form a circle. When added to the firepit circle, a pair of concentric circles emerges. I like to think of it as family and friends circling together.”

As you see, it’s not strictly trilithons or anything. Definitely an improvisation on the Stonehenge concept. The tepees of sticks were no doubt added to bring some eeriness to the site.

We can only give it 5 druids, but we like the surroundings and probably would have enjoyed being there. Just another example of how the Stonehenge concept is everywhere!