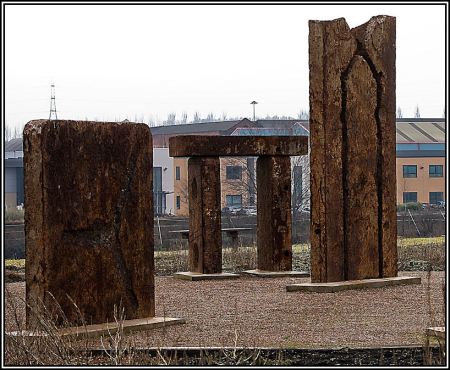 Another one for our list of large permanent replicas! When we reached 30, we thought that had to be the end of the line. Now it’s 65, and we know there are more.

Rotherham in South Yorkshire had a flooding problem. When a flood plain was created to protect the downtown from flooding, nothing could be built there, so it was perfect for use as a nature reserve. In order to commemorate the former industrial use of the site, people took some of the iron ingots that remained on the site and built a memorial circle in imitation of ancient stone circles around Great Britain, and although it was made of iron, they named it Steel Henge.

Yes, we’re pretty sure about that spelling. Most sites writing about it are calling it Steel Henge rather than the more intuitive Steelhenge. (The BBC at the above link even spells Stonehenge as Stone Henge. When the Beeb does something, does that make it right? Or even official?)

Aaaat any rate . . . we’re posting this only because they included three trilithons in the circle, moving it from outside our jurisdiction to inside. And, yes, they did take time to line some part of it up with the solstice. It’s not entirely clear what part or for that matter which solstice, but that’s okay. Its presence is what matters.

There is a certain grace to this, having the riverside (the River Don) nature preserve and its birds and wildflowers punctuated by a monument to the city’s former industries, a monument that uses some of the gritty remains of the industry to build a form that suggests the timelessness of the landscape. Man’s pursuits and efforts come and go, and the iron once in the furnace is now no doubt at times a perch for hunting birds of prey.

It suggests, instead of the pain we associate with the loss of industry, a move toward peace and balance with life. We chose these two pictures to illustrate the two sides: man on one side, and nature, including the sky and landscape on the other, linked by this structure in a state of rusting and returning to nature. Creative. Poetic, even.

Score: 6½ druids. Or should it be aging iron workers? This bears little resemblance to the real Stonehenge, but that wasn’t its goal, and we find it an interesting use of the henge idea.

What’s that you say? “Shut up! We just want to laugh about a henge!”? Ha, caught us out. Not much funny in this post. But doesn’t Yorkshire take enough of a ribbing? And it’s Yorkshire Day in a few days, a good time to show it’s not all flat caps, whippets, accents and men taking their clothes off to “You can leave your hat on.”

That is, as far as we know. We do, however, object to the manufactured word in this Sheffield headline about Steel Henge: “Stone h-engineering on old steelworks site”. We have to draw the line somewhere!

For pictures of the nature part of the preserve, see a few more photos by Mr. Clarke here. If you think of anything funny to add, feel free to avail yourselves of the comment function. Otherwise, until next time, faithful readers, happy henging!

No one does a Stonehenge like the locals! Above we see bonsai hengers (wouldn’t Bonsai Hengers be a great name for a rock band?!) and gardener/artists Tony Oswin & Wilf Colston with their prize-winning creation at the Salisbury Community Show recently–a charming Stonehenge model landscaped with bonsai trees and a bit of whimsy.

We have to say this is one of the finest and prettiest Stonehenge models we have seen! True, the landscape around it is not true-to-life, but we see no reason English Heritage shouldn’t run out and make it so. It would cost a great deal less than not putting in the tunnel and not putting in the new visitor centre has cost them so far!

The photo above, used courtesy of the Salisbury Bonsai Society, to which the gentlemen belong, shows the thought that must have been put into the Stonehenge section of the display. The stones themselves were cast in molds to make blocks all the same size and then hand carved with a knife and painted. No buying a little Stonehenge kit and quickly standing the plastic pieces in a circle for these fellows!* Care has been taken to make the assemblage resemble the original. We’re impressed!

Score: 8 druids! (New readers–no we do not believe druids built Stonehenge. Our scoring is a bit of a joke.) That’s very good for a small model. Mr. Oswin and Mr. Colson now have Clonehenge score bragging rights. That and £3 will get you a cup of coffee at Starbucks. Unless prices have gone up!

We wish someone would start a serious site about Stonehenge replicas so that lovely ones like this would get their due from a thoughtful writer. But alas, it’s just us out here, I’m afraid, and we’re deficient in the genes that make one serious. They’re lucky we don’t live closer or we might have slipped in some mini-druids like those that mysteriously appeared at Babbacombe Model Village in 2005.

Our next post will bring our list of large permanent replicas to 65, and it’s another British one, so stay tuned! Until then, gentle readers, happy henging!

*You know we love you, Two Green Thumbs Gardens! 😉

Remember the Alton Towers post? Of course you don’t. It’s clear from how often people send us henges we’ve already posted that no one goes back and looks at old posts. So be it. We prefer to pretend we have a faithful following that has read every post since the beginning, and remembers each one and what we said about it–so play along, people!

For a slow, arguably too detailed, account of the development of the Alton Towers property from Iron Age Fort to hunting lodge to grand estate to public gardens to amusement park you can have a look at the Wikipedia entry here. Or not. The relevant phrase is “A building known as Stonehenge”. Well put. It doesn’t say anything like “a building that looks like Stonehenge”. There is a reason for that, as you can see.

But since you, faithful reader, remember our discussion of that from the first post, no need to go over it again. The interesting point here is that these photos are brought to you by Alton Towers’ unique (we think?) position as a mecca for roller coaster enthusiasts and those who seek out Stonehenge replicas (if such people exist. Surely they do–every other kind of person does!).

Mr. Clinton Montague a.k.a. @iblamefish kindly took these pictures for us, at our request, on what was actually a trip to sample and blog about Alton Towers’ rides. Very kind. We encourage readers to visit replicas we’ve posted and send pictures so we can do what we’ve done here and milk each one for a second or even third post!

By the way, we want to thank another reader and member of the Clonehenge Facebook group, Basha Cohen, for mentioning and linking to Clonehenge in her article Wild and Wacky Stonehenge Replicas at OpenJourney.com. She calls us “the complete listing”. We like that, but must demur–we know there are more out there yet to be found and posted.

Way back in March we posted a wooden model of the long barrow at Wayland, often called Wayland or Wayland’s Smithy.  The artist, Les Williams, told us he planned to do West Kennet [sometimes spelled Kennett] Long Barrow, a site we’ve mentioned here many times,which is located in Wiltshire very close to Silbury Hill, not far from Avebury, and not too terribly far from Stonehenge. [See comments below for the answer to the Kennett/Kennet confusion.]

Now he has finished carving it and we are honoured to receive first-posting rights for his admirable accomplishment! Mr. Williams’ opinion is that West Kennet Long Barrow (WKLB) is the most atmospheric of the ancient henges and barrows of southern Britain and Wales, and he seems to have captured some of that in this careful rendition. 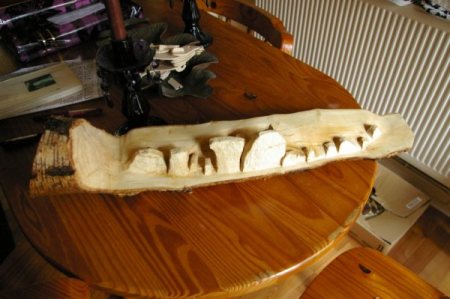 Curiously he has not chosen to put a finish on this one as he did on the first, perhaps to retain more of the rough-hewn look of the giant stones at the barrow itself.  Also, in order to make the stones large enough he has included only the front end of the long barrow, leaving the rest to the imagination.

But we don’t blame him. The choice he had to make was whether to A. make the stones tiny so he could include the whole barrow, B. use a huge piece of wood, most of which would be featureless barrow anyway, or C. what you see here. Good choice. We can tell you from personal experience that what is most riveting about WKLB is the row of megaliths at its entrance. Not that the interior isn’t  awesome. Amazing place!

And Silbury Hill is visible from there. They and Avebury’s henge and stones, plus several lesser known sites are all part of a mysterious, ancient, and probably sacred landscape. Stonehenge has a unique standing in people’s minds–a curious must-see for tourists who look at it for a bit and then go off to see other English things–but the truly wonderful and remarkable thing in Wiltshire is not that grey linteled circle, or any one of the many remnants of what was done to the landscape all those millennia ago. No, it is the constellation of all of them, the magnificent puzzle they create and the questions they pose, laid out on the hills and down for all to see.

What is that you say? Oh, right–Les Williams and his carving. Heh, I’m afraid we get carried away. Well done–the stones are the right shapes and in the right order. Is anyone else doing anything like this? It is a unique and remarkable creation, somehow holding more mystique than a Stonehenge replica would.

No druids will be awarded, since it is not a Stonehenge replica, just the appreciation of the megarak* nation, and the breathtaking fame and riches that result from being featured on Clonehenge. Don’t let it turn your head, Les!

Did we somehow miss slipping the word eccentric in there? Well, anyway, for those to whom it currently applies, keep cool and to everyone–happy henging!

*A combination of the words megalith and anorak. One who is very interested in megaliths, standing stones, prehistoric stone circles, etc.