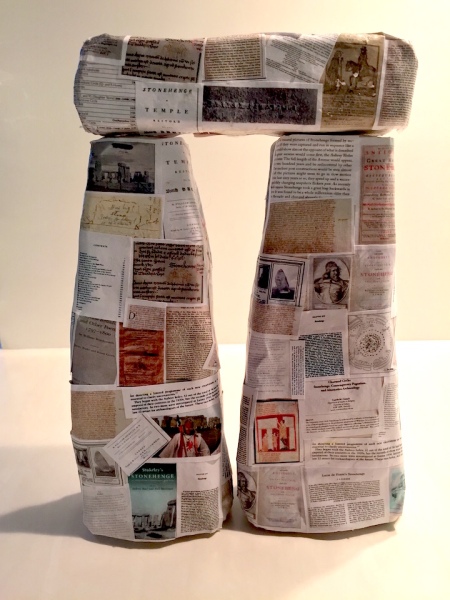 Yes, hello, we still exist, at least sporadically. Hope you are doing well, gentle reader. Much has been happening in the Stonehenge replica world, and we can’t keep up, but this brilliant model has been top of our list of things to be posted!

Created by Kathleen Coyne Kelly, a professor at Northeastern University in Boston, it is a plaster model of a Stonehenge trilithon, papered over with images of pages from scholarly books and manuscripts, all writings about Stonehenge. She writes:

In the game rock-paper-scissors, paper covers, or beats, rock. And Stonehenge is indeed covered by paper. Reams of paper have been produced by archaeologists, historians, literary critics, poets, neo-pagans, and travel writers, describing, explaining, and speculating about the origins and purposes of Stonehenge.

So true! In our 8+ years doing the Clonehenge blog and curating (??) the Facebook Clonehenge group (where most of the henging news and activity takes place, if you’re interested!) and page, as well as our Twitter account, it has become glaringly obvious to us that the many ideas, theories, concepts, and even jokes about Stonehenge have served to almost completely overwhelm the experience and existence of Stonehenge itself as a physical object.*

Stonehenge replicas rarely look like Stonehenge or each other, despite being, to be necessarily redundant, replicas of Stonehenge, and this seems to be largely because people’s ideas of what Stonehenge is, although usually inaccurate, supersede, in their minds, Stonehenge as a real ancient stone construction standing on Salisbury Plain in England in the U.K.

It sometimes seems as if the physical thing could fall and hardly affect Stonehenge as a concept. Maybe that what is meant by the word iconic, when people say Stonehenge is an ‘iconic’ monument. Stonehenge isn’t stone, primarily. The hulking grey mass itself is just a symbol for some kind of archetype embedded not only in Western culture but in minds worldwide, as evidenced by Stonehenge replicas around the world and in books, films, and television shows**.

An example of a similar process would be how we just took Professor Kelly’s wonderful trilithon and ran with it in order to illustrate our own thoughts and experiences just now. 😉  Sorry. Our point is, we think the concept behind, and the trilithon itself is just brilliant!

A few more words from the estimable and perceptive Professor Kelly:

I also got a tattoo—I had wanted something connected to Stonehenge, and it seemed like the right time, since I was giving this paper at a conference with the theme, “Off the Books.” I ended my talk with this: 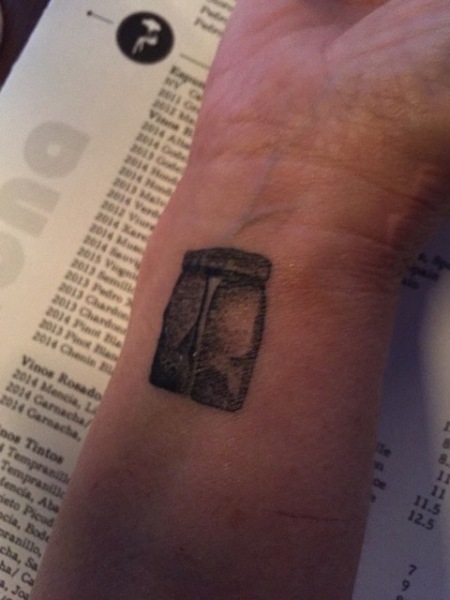 “And here is another way to remember Stonehenge—off the books and on the skin.”

I’m giving another paper on Stonehenge in January: the theme of the conference is literature and its publics, and I’m focusing on homages to and parodies of Stonehenge as examples of appropriation . . . Your site is of course discussed!

We hope we hear more about that paper, and we’ll pass along anything we think you would find interesting, gentle reader. Until then, all who wonder, happy henging!

*This may be why some of the most interesting discoveries about Stonehenge in recent years have been made by Tim Daw, who for a while did some groundskeeping work at the site. Working the actual site puts you in an ideal position to see Stonehenge as it is and not as the ideas about it.

**We recently, for example, learned of a Turkish television drama that featured a Turkish mafia family meeting at Stonehenge, or at least a Stonehenge