It is the curse of the henger.  I was building a new wine rack for the hall closet and the nicely shaped maple pieces suddenly started talking to me.  And what they were saying was “we are a henge.”

And they became a henge.

Then the spirits intervened (it is a wine rack after all) and the sunlight reflected of the car window shone directly through the southern trilithon.

A clear message that the Mayans were wrong and the world will go on after the winter solstice.

This is my first entry in the Clonehenge End of the World Festival contest as announced on October 23, 2012.  Life is Good.

Thank you Nancy for letting me “guest blog” on Clonehenge.  I feel like I am typing on sacred ground.  Well not exactly “sacred ground” maybe “sacred pixels.”

You can see more of my hengish contributions here.

Artist’s conception of the proposed reef, from the website of the Reef Builders International

On the 20th of November, 2008, Clonehenge first appeared online. Posts were short, and we often did two or three a day. Four years later, here we are, doing fewer posts and longer, but still plugging away. Happy birthday to us!! That Clonehenge goes on at all is remarkable, and fun. Thank you to all (three?) of you for your interest and support!

part of the Neptune Memorial Reef

For our birthday post we have chosen to tell you about the first large underwater Stonehenge, one that is still in planning stages, a limestone reef in the form of Stonehenge, to be built for the enjoyment of undersea organisms and human divers by Reef Builders International, LLC.  (Beware of that site–egregious use of Flash!) These people also built the Atlantis Reef Project, aka Neptune Memorial Reef, a place for burial at sea that is fancifully made to look like the lost city of Atlantis.

We say this is the first large underwater Stonehenge because unsurprisingly a five minute search turns up three different companies (here’s one) that make Stonehenge-style decorations for fish aquariums (aquaria?), which means there are bound to be more somewhere. People have been doing small underwater Stonehenges for some time. Perhaps it’s an echo of the future time when Stonehenge itself will be underwater!

No score, BTW. This henge hasn’t been built yet, but we hope they follow the picture and shape the stones in imitation of the real thing. The press release gives us only this:

“The limestone blocks that make up the project will be worked by hand with diamond blade grinders and chainsaws stone by stone. When completed the stones will be carried by ocean-going barge to the project site 45 feet underwater 3 miles offshore of Key Biscayne Florida and assembled underwater.”

But perhaps the most interesting sentence reads:

“The Sarsen Circle with forty upright columns and lentils weighing over ten tons each will be constructed with 15,549 cubic feet of Limestone weighing over 700 tons.”

We can’t wait to see those lentils. This Stonehenge will not only be recreational but in a pinch it could feed thousands!!

Thank you for all of the birthday wishes you haven’t sent yet, but that we know you intend to! We look forward to whatever gifts you send as long as they are this.  Any of these cakes would also be acceptable, gluten-free, of course! (All right, if you twist our arms we might accept plane tickets and a holiday in Wiltshire!)

Thanks again to our readers (surprisingly many), and our critics (surprisingly few), to our Hengefinders, and to WordPress.com, and of course to those crazy hengers of every stripe. We are grateful for four fun years! A pity the world only has a month left. We were just getting started.

Until then, friends, happy henging! 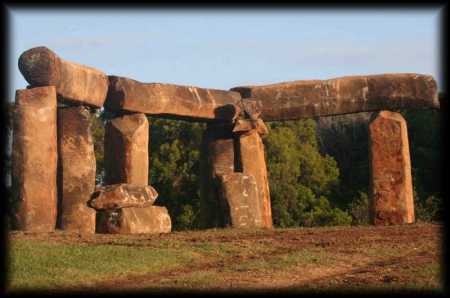 Another line from the same site: “ Stone columns, some up to 10 metres in length, being strategically positioned across ‘Eagle Farm’, forming a Byron Bay “Stonehenge”.  Mr Horstmann and his artist friends have harvested these natural Basalt-crystals on the land to artistically create their Stonehenge-style Eco-village.”

We admit we wouldn’t mind seeing this place! Mr. Horstmann (seen at left in photo by Jeff Dawson), born in Germany, has spent decades building his ecology park in New South Wales. It includes a village with minimal environmental impact, a health resort, and facilities to make possible the trial of various green practices with the purpose of helping to popularise those that have the most promise. His hope is that the park will encourage others all over the world to embrace environmentally healthy practices. (Because that’s going to happen. Lol!)

Fortunately our job here is not to make sure that people save the planet, but to report on the more urgent matter, these Stonehenge-ish constructions. Every Stonehenge replica listed on this blog, or not listed for that matter, has unique peculiarities, and in this case perhaps the most intriguing thing is the stones it’s made from: they are basalt columns, similar to those that make up Devil’s Tower in Wyoming (Close Encounters, anyone?), and the Giant’s Causeway in Northern Ireland.

These columns were on the property to begin with. Let’s face it–who wouldn’t think henge if they found these things lying around with nothing else to do? What’s that?  Everyone but us? Well, right, but clearly Herr Horstmann is one of us–a henger, henge-o-phile, henge-orak, clonehenger. Welcome to our ranks, sir! We honour you for your vision!*

But we know a lot of people are tied up right now, cleaning up from Sandy, fixing the economy, and playing Halo 4, and may not get around to that right away. For now, Dieter Horstmann’s henge will have to do. Hard to give a score because we don’t think we’ve seen the whole thing. But we’ll give it 6 druids and add it to our list of large permanent replicas.  Impressive large stones. May his endeavor succeed beyond his wildest dreams!

P.S.: Flamehenge! And our thanks to Hengefinder Matt Penny for finding the Byron Stonehenge!

*The  subject of how Stonehenge is often connected in people’s minds with ecology and saving the earth, despite the fact that building it would have required disturbing the environment to a degree not seen on Great Britain until that time, might provide a thoughtful person with material for a long and interesting essay touching on psychology, our modern perceptions about ancient people and nature, and the kind of hierarchical society that is required to orchestrate this kind of monument building. But as you know, we are about as far as we can get from being thoughtful people, so we’re off the hook. Phew! That was close!