photo from the Esperance Express *

It was in the news recently–the town of Esperance in southwest Australia plans to build a Stonehenge replica in order to attract tourists. Sounds mad, of course, but it isn’t the first town to make such an announcement. A Canadian town said much the same thing last year, and right there in Australia two years ago March a determined gentleman named Ross Smith announced his intention to have one built by the winter solstice (21 June down there).

And that is where this gets interesting. It turns out that a quarry quite near to Esperance was where the stones for the Ross Smith henge were being cut, and when that effort ran into financial trouble it was stuck with most of an unassembled Stonehenge that no one wanted. The stones were then offered to the town of Esperance at a discount and after some controversy the town has said yes. (The picture above indicates they intend to build the monument as it is thought to have looked at its height.)

This is a Stonehenge replica first! No other full-sized stone replica, in fact no other replica at all as far as we know has been bought at discount after being cut for someone else. This is Clonehenge history AND recycling history taking place before our very eyes! This world is a place of infinite novelty. 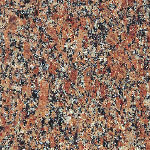 The stone is being called pink, but it is actually a kind of rosy brown. The website of the granite company shows the colour at the left for the Esperance granite. This has not stopped the pink jokes, of course, and one prominent megalith expert in a quip suggested the name “Gayhenge.” Tsk tsk! Shocking! 😉 Anyone knows that in Australia that would be Poofhenge!

It is unfortunate that some people and articles are calling this the “only full-sized stone replica in the world.” Ahem . . . it’s called Google, people. Use it! Certainly the Montana Stonehenge, which was carefully built to scale and made of limestone, qualifies. It’s possible that one of the Japanese Stonehenges is also of stone. And what about Connecticut’s granite Circle of Life? Well, there is still room for it to be the most accurate if they pay attention to detail. Only time will tell!

We of course enjoyed this quotation from one article: “I understand there are two or three replicas of it around the world but they are all made from things other than granite rock,” he said.

Two or three–at least! We hope people are bombarding them with links to Clonehenge. Let them find their place in the litany of replicas. They have a chance to do something terrific here. And Esperance means Hope!

*[Is that George W. Bush with a fake moustache??]

Note: Here is an update on this replica.

Okay, okay, we know it has been a while since we posted. The truth is, we came within a hair’s breadth of getting a life recently. But fear not, it has passed and we are back, kinda, sorta, at least long enough to add this admirable photo to our blog and this admirable sculpture to our list of large permanent replicas.

Created or at least placed in 1980, it is located in Immerloo Park in South Arnhem, in the Netherlands. The artist is Marius van Beek, a prominent Dutch sculptor. You can see its location and another picture of it here on Panoramio.

As far as we can make out by using internet translators on the Dutch pages, the two standing stones mark sun positions in spring and fall. The function of the red stone set on a tilt is less clear.

While it is a trilithon and resembles Stonehenge in its sun connection, this sculpture also echoes the Bolivian ruin also called the Gate of the Sun. Mr. van Beek may have had both ancient monuments in mind. A scan of his webpage will show that he has a fascination with standing stones and variations on the trilithon form. Our kind of guy! (Except he works hard and has talent.)

Score: 5½ druids. We like the sun alignments and the pleasing form of the gate. Every city should have something like this!

By the way, this is not Arnhem’s only Stonehenge replica ever. Check this out:

This 4 meter by 4 meter replica was built for a special exhibition called The Fascinating World of Stonehenge at the Municipal Museum of Arnhem in 1988=1989. Apparently a similar model of the Newgrange Passage Tomb was also built, although regrettably we have no photo of that. This is a very nice model and would probably rate 7 or 8 druids depending on a closer look. Perhaps Stonehenges come in twos!

We don’t have many replicas lined up to post, but we did hear there’s a town in Australia that has plans for one. We’ll post on that sometime soon.  Meanwhile, send in your homemade and newly discovered henges. The summer henging season is nearly upon us!

(You didn’t expect this to be funny, did you? Everybody knows there’s nothing funny about the Dutch.)

photo and henging by Caitlan Vandewalle, used with permission

But we like this: “These actually are balsa wood. Sorry. They’re in a teacup to add a glaring element of Britishness, or as my boyfriend put it “you can’t reduce an entire culture to tea and Stonehenge!” to which I replied, ‘well I just did, so… maybe you can’t.’ ”

Well done! What are the English besides Stonehenge and tea? Although as one commenter suggested, it would work best if there is a picture of the Queen on the teacup!

We were tickled to see that the whole thing was inspired by the Stonehenge mini-garden built (planted?) by the inimitable Janit Calvo of Two Green Thumbs Miniature Gardens, a friend of the blog. One Stonehenge replica inspires another. Stonehenge has perfected a unique and successful reproductive strategy seen nowhere else in nature, that of mind infection, and we see it at work here.

It seems by the comments that most Brits were not offended, but actually liked the visual shorthand here proposed for their culture. Still, just in case, Caitlan offers a salve: “(I know that’s not all there is to the UK!!! Feel free to make a washington monument obelisk in a mcdonald’s fries carton, it would serve me right.)” It just wouldn’t look as nice on the windowsill, though, would it? Making it even more accurate as a representation . . .

Score for the teacup henge: 6 druids. It’s only two trilithons and a few stones thrown in, but it has charm and, of course, moss. We liked it the moment we saw it. Maybe we’ll make one ourselves and save the plane fare. It’s exactly like being there!

The Pictish stones garden made for the boyfriend, also nicely done! 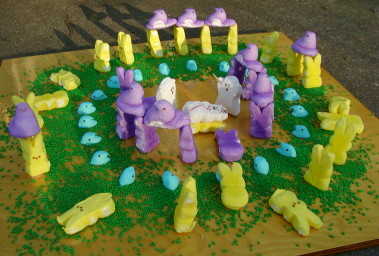 photos from the PeepHenge page of Lord of the Peeps

In the northern hemisphere it is Spring. And where there are those who celebrate, this Sunday is Easter. In our opinion, this is the ultimate Spring and Easter or Eostre, or Spring Festivus henge! Look, it even has bluestones!

And amazingly even that 3 lintel section that still stands today at the real Stonehenge, with the trilithon horseshoe oriented toward it . These people looked at Stonehenge before they built their, well, madcap? zany? crazy-ass? henge. And druids are included, of course. Ish.

But the best thing is the sacrificial slaying, of course. A ghost/druid is posed in the act of ritually slaying a marshmallow snowman (symbolising Winter?) on a yellow bunny altar stone. Violent death never tasted so good! (We would see to it that the victim and perpetrator ended up on a funeral pyre–just until they were toasty brown and a little runny!).  Oh, murder most foul!

We haven’t said much about Lord of the Peeps. This is because you wouldn’t believe us if we told you that someone has done Lord of the Rings with marshmallow animals. Would you? No, we didn’t think so.

Score: 7½ druids. This is a great foodhenge! It has some accuracy, a sense of humour and some downright, almost worrying, craziness. That, folks, is what we like!

Happy Spring, Eostre, Easter, spring bird migration or whatever you celebrate this time of year! Enjoy it, but watch out for ghosts with toothpicks!