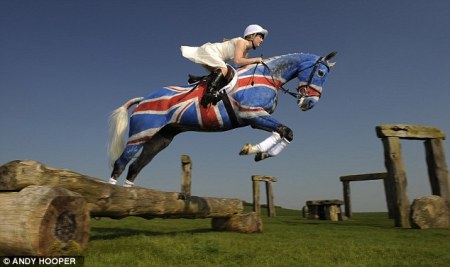 Don’t bother to look at the horse. Ignore the young woman with her dress flying up provocatively in the back. Yes, the important part of this picture is the trilithons! Sent in by alert reader, Welsh academic, shaman and author Mike Williams (we are honoured, sir), this Wiltshire setup, referred to as the Stonehenge Jump, was featured here once before, but we had no inkling that it was still being used until this morning. Be sure to have a look at this link to the article accompanying the picture above, especially the video part way down the page. Surprised they didn’t use the hymn Jerusalem as a background!

A couple of weeks ago, we were shown a picture of a recent crop circle in Wiltshire and all we could look at was the Stonehenge-like thing near it. That mystery appears to be solved–it was this circle of trilithons. We love when little mysteries solve themselves!

At any rate, we have already scored this at 5 ½ druids back in 2009. Seems right. The Daily Mail Online article says, “The Stonehenge jump, made from fallen beech, is the stand-out feature of the Barbury International, which will be staged on Marlborough Downs, Wiltshire, between June 28 and July 1.”

It was a lead-up to the Olympics, which also had Stonehenge jumps. It is too bad that crazy golf isn’t an Olympic sport. We could have been seeing Stonehenges all over the place during the games! At least Jeremy Deller’s wonderful bouncy Stonehenge is still touring. And elsewhere people are busy building Stonehenge replicas hoping to have it finished by winter solstice. We know the henge-oraks (combination of henge and anorak, our new word for the day! The thrill of it.) are out there somewhere and we look forward to hearing about their creations.

In other news, we hear a rumour that Achill Henge is bringing in enough money to give the good people of County Mayo pause. Is there yet hope that it will be permitted to stand? Oh, the tension, beauty and excitement of the world of Stonehenge replicas! One can hardly bear it sometimes. Other times one has a cup of tea and a biscuit.

Wait. What’s that you say? The horse is painted? Why so it is. We hadn’t noticed. Let’s hope the girl didn’t get any of that chalk on her dress. Or anywhere else. Messy business, these horse events! Until next time, gentle readers, happy henging!

This week we were alerted to an Irish radio documentary about Achill Henge, one name for an, some say, illegal construction on an island off Ireland, as our regular readers know. We have been yammering on and about Achill (pronounced ACK-il, not AY-chill) Henge since its inception, and while we respect the rights of people to decide what is to be permitted on their common land, we will be a bit sad if and when the builder, one Joe McNamara, has to take it down.

Meanwhile, here is a link to this brilliant radio documentary, brilliantly entitled Clonehenge ! And no, we do not say we like it solely because everything sounds better and smarter when said in an Irish accent (as we were told on our mothers’ knee). Or because anything about a Stonehenge replica is more interesting to us than anything that is not about a Stonehenge replica. Well, maybe a bit. Of each.

Still, how could we not like it when there’s this conversation:

“I’ve been to Stonehenge and it didn’t impress me. But this impressed me.” “You’re only saying that ’cause you’re Irish.” “Absolutely!” “If Stonehenge was up the road, you’d be sayin’ it’s great.” “Yes, I would.” Laughter.

It also brings up some points worth mentioning. McNamara was stopped before he ever got to complete Achill Henge. No one knows what was meant to go in the center or if there was more to it. We may never know. *we sigh and make puppy eyes at the planning board*

Also it mentions the archaeo-acoustic research that was done at Maryhill, Washington replica, saying that the Maryhill replica is a bit rough, or something to that effect. We agree and have often thought that archaeo-acoustic research at Maryhill can hardly be relevant to the acoustics at the real Stonehenge–the “stones” at the Washington replica are so differently shaped, proportioned, and textured, and of course of a completely different material. Don’t all of those factors affect acoustics? Did those researchers just want funding to visit the Pacific Northwest?*

But best of all, unlike this post, the radio documentary is quite entertaining and leaves one with a smile. And there is a lovely gallery of pictures to click through, which we would have nicked and posted here if we knew how. Our thanks to its creator, Ronan Kelly. If we could, we would hire him to be on the Clonehenge, the Series, the one where we visit a Stonehenge replica per week, discuss it and interview visitors. No, we don’t have all of the details worked out just yet. Or the funding. But it is real n our minds and that’s what counts!

And, hey, Joe McNamara, we salute you. Don’t stop now! Until next time, friends, happy henging! 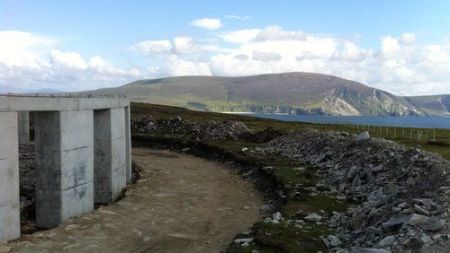 * So do we! But free tickets to visit Achill Henge will be even more eagerly accepted!

P.S.: We have relearned how to spell “nicked” after aliens abducted us and removed the spelling from our memory. Someone ought to do something about those pesky things!

This is a blog dedicated to the idea of the Stonehenge replica and its endless variations, not because we think Stonehenge replicas are a good idea–if that were true, this would be a serious blog–but on the contrary because we think the whole idea is by its very nature ridiculous and in some hard-to-define way, unrelentingly humourous.* People just can’t help themselves!

That said, there is, of course, nothing funny about an exact replica of Stonehenge made of foam being loaded onto an eighteen-wheeler and carted around North America so people can experience Stonehenge without having to meet any English people or accidentally photograph sheep. Well, we’re glad you don’t find it funny, because an enterprising group of students from Tallahassee has created a Kickstarter–an internet method of generating contributions from small but interesting projects–to do exactly that. Here is part of the pitch on their Kickstarter page:

“A monument of such amazing wonder and beauty should be seen by as many people as possible, don’t you think? However, visiting Stonehenge is much harder than it seems, and only a limited number of people WORLDWIDE see it each year, and even then, only a fraction of those people purchase the special access pass which is required to let them walk among the stones. Imagine all the hassle that goes into seeing this epic monument. Now, imagine just having to travel to a museum near you to walk amongst its legendary beauty.”

Nothing humourous there! Americans will be able to travel a short distance, walk among the foam stones, experience 4000 years of history, and not handle any of that funny money! Where they are getting the 4000-year-old foam, we are not certain, but there is still time for the details to be ironed out.

Another page announces: “We are planning five festivals to celebrate the exhibit, each one will involve several days of celebration, with camping, eating, music, art exhibits, dancing, all night fires, staged pagan rituals, and the whole druid party thing.” Splendid.

We were, of course, bemused to see their statement that it would be the “first life-size replica”. Hello, have we met?** It is remarkable how often we see this claim, in the face of all evidence to the contrary, and no doubt whoever is doing the Clonehenge blog hundreds of years from now (bless their semi-organic hearts) will see the same thing–no one ever checks first! The claim that it will be the world’s most accurate replica, however, is welcome. Make it so!

Stonehenge: the American Tour, GoStonehengeTour, and one or two other names are used, but they are all the same project. Visit their Facebook page! Pledge money! Make this a reality, gentle hengeophiles! A pledge to this Kickstarter is a vote for Stonehenge, or a vote for absurdity. Either way, we all win!

[We will not even attempt to address the motto: “If we build it, will you come?”]

In the past year, we have seen a Stonehenge replica built of recycled stones in Australia, a guerilla replica, for which a man was arrested, built in Ireland, a full-sized inflatable Stonehenge touring the UK, a group formed to build henges, more than one wonderful cakehenge, and numerous others of various natures. What next? Only the Stonehenge brain virus knows for sure! Stay tuned, and happy henging!

** Maryhill, Washington’s replica springs to mind, as well as the one in Montana, Esperance Australia’s replica, and the remarkable but now defunct BBC Foamhenge. There may be others on the List of Permanent Replicas.

This is not a post so much as an alert. Hengefinder General (E class) Glastonbury’s keen eye noticed these hurdles at one of the Olympic horse events.

I think we can say with some confidence that this is not where your Olympic millions have gone. Still, we post Stonehenge replicas, so here it is!

Another view, taken from the television

We knew there would be Stonehenge replicas connected with the Olympic summer in England. We were tickled with the bouncy Stonehenge, disappointed with the choice of Glastonbury Tor for the opening ceremony. Now we have these.  The stones are very squared off, of wrong proportions (too thin for their height), painted like a secondary school theatre set, and of course, set up like horse hurdles. A little pathetic, but another sign of the hengemania seizing the world!

Our thanks to Pete Glastonbury for noticing these and taking the pictures from the telly. We’re glad that King of the Mountain is not an Olympic sport. We shudder to imagine the muddy little Silbury Hill replica they might have produced!