We don’t need to do a full post on this, but it was passed along to us by the ever alert Mr. Peter Glastonbury, and now that we know about it, we feel Clonehenge would be incomplete without it.  What we’re talking about here is this:

“Hidden away in a box in the Pitt Rivers store rooms are a set of 13 models depicting various megalithic monuments from England and the Isle of Man.” (See here.)

Brilliant, right? No Stonehenge, but we do find an old friend among them: Wayland Smith’s grave, now known as Wayland’s Smithy, a wooden model of which we posted here.

We’ve posted models of places other than Stonehenge before, of course, but to find a set of models of megalithic sites that even megaraks might concede to be obscure is extraordinary. Men-Al-Tol, Chun Quoit, the Calderstones: who builds models of these? Great stuff. Well spotted, Mr. Glastonbury. You will go down in the annals of Clonehenge history!

You, too, can make Clonehenge history, Gentle Reader, and, no–you don’t have to go down in any annals if that’s what’s worrying you! Find or build a model or models of any megalithic site, preferably in the British Isles or Europe, and send a picture, description, and if possible your motivation to us so we can do a post about it. Worldwide fame awaits you! Or at least some very wary looks from people who find out!

Until next time, friends, happy henging! 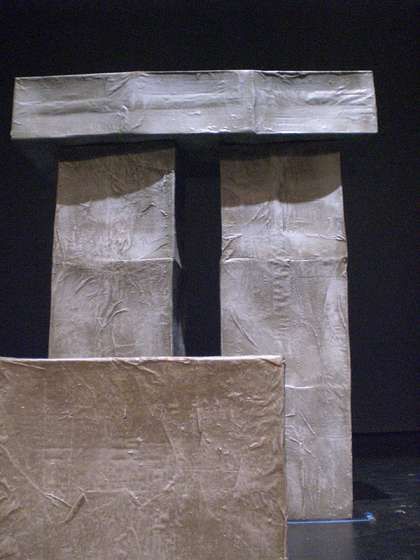 photos by McNopants13 on Instructables.com

Pardon us, but we must begin with a lengthy quotation:

“I had a stage show to put on with some of my students and thought it might look cool to see them carry on and build stonehenge during a certain scene so away i set off to build the elusive stone henge …. but GASP! I don’t have the money nor the resources for giant stone slabs … “fear not handsome craftsman” a voice said to me in my head… I will make a giant paper mache version of the sotnes and so I set off once again with a plan. and alot of boxes here are some photos from the build and some of the final stones on stage. ENJOY!”

Above you see some of the papier mache versions of the aforementioned sotnes,as they are so delightfully misspelled. The accompanying pictures show a process of taking smaller boxes, attaching them to make long rectangles, covering them with papier mache and painting them grey. And then, of course, forming trilithons with them.

Curiously, despite the replacement of the continuous circle with simple trilithons and the completely un-Stonehenge-like shapes of the stones, the creator/instructor remembered to add bluestones of a sort, a nice touch which might gain them a much-needed druid for their score. Or we should say–his score, the clever hengineer being Monsieur McNopants13. Or Madame McNopants13, as the case may be. If it is a female McNopants, of course, we would want to know, as it’s the sort of thing we would prefer to lead off the post with so as to acquire the trashier reputation we feel we need in order to draw more readers.

As you can see above, even as far as this creation is from resembling Stonehenge itself, it still has an atmospheric quality when used as a stage prop and lit well. And let it never be said that most henge-o-philes are not generally well-lit. Har. And speaking of heavy drinking, for no reason at all we are reminded to thank Matt Penny aka @salisbury_matt, the High Lord and Grand Poobah of Salisbury and Stonehenge.net, for sending us the link to this “instructable”.

As for score, it’s like this–the do-it-yourself aspect and the bluestones are on the plus side. The strange proportions and the fact of the trilithons without a circle are on the other side. We award this one 6 druids! Quite high, really, as, let’s face it, those who created it probably were, too! We want to encourage this kind of thing, after all. More henges, less guns; more papier mache, less greed. That’s what the world needs! More or less. And until next time, friends, happy henging! 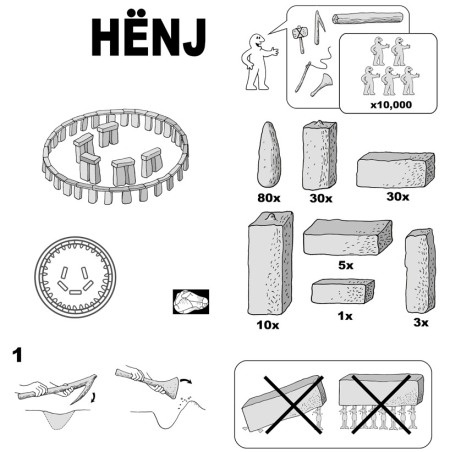 First on this second edition of Henge Podge is not a Stonehenge replica but a clever henge-related item: Ikea-like instructions for the construction of Stonehenge. We couldn’t possibly say anything as clever as this is, so we’ll just post a second picture, advise you to click on the link because there is more to it, and move on. Yes, that is a druid you see there.

Next bit is something we’re keeping an eye on: a tentative plan for a Stonehenge replica, this time in Harwich. Reading the article here we are uncertain how much like Stonehenge this so-called “version of Stonehenge” will be. They have the stones, granite from a dismantled railroad bridge, and not much else so far. It remains to be seen if it happens at all and if it does, whether they bother to put on the all-important lintels. Maybe we should send them the Ikea instructions!

photo from a nut in a nutshell

And finally we present the only snowhenge we saw this winter, despite all of the snow that fell. We believe this was sent to us by the absolutely marvelous Matt Penny aka @salisbury_matt , sole proprietor and strong proponent of  Salisbury and Stonehenge.net. Thank you, sir. He and Señor Glastonbury are duking it out for top Friend of the Blog status, which entitles one to every cent of the money we have made up until now by doing the Clonehenge blog. The suspense is killing!

Meanwhile we can’t remember who sent us the other two items. Thank you, whoever you are. Comment on this post with the information and we’ll add it.

In the old days we might have done a whole post on the snowhenge, but that url blasted across it is too much, so this is what you get. We do, however, have a couple more  items recently submitted. A henge documenter’s work is never done! We’ll be back when we can see our way clear to doing something this constructive again.

Who knows when that will be, but until then, everybody, happy henging!

A quick news post. This was spotted in the Visit Ireland exhibit at the prestigious Philadelphia Flower Show, this trilithon is probably meant to be a dolmen rather than a Stonehenge replica, but we’re especially entertained by megalithic replicas at flower shows. We’ve posted some before, here (South African orchid show) and here (Salisbury Community Show).

This one is nicely done, with fake stones that pretty much look like stone, and moss drapes gracefully like a sort of full-body toupee. No score because if it’s in the Ireland exhibit, it can’t be Stonehenge. Just wanted to give it a mention. You people just can’t help yourselves, can you? 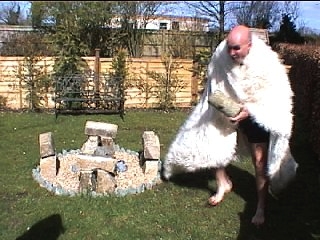 We have been accumulating odds and bits related to Clonehenge, none of them quite right for an entire post, but each a curiosity worth a look. Take the example above, a typical Englishman in tradition dress out for his stolid and dignified constitutional. Barely worth a second look if it weren’t for the henge-ish thing there: four trilithons in a circle surrounded by bluestones. We thank friend of the blog Feet, oops, we mean Pete, Glastonbury for drawing our attention to this. (That’s not him.) We also thank the shadows and the robe for being so helpfully strategic! Oo-er! We were going to make a comment about “stones” but, really, we’re better than that.

Also from Mr. Glastonbury, photo taken by him, is the curious grouping of stones at the left. He says, “I spotted this in the garden of Teachers Cottage in Avebury High St. It is a representation of the Obelisk and the inner stones of the southern circle in Avebury. An Avebury Model in Avebury!” Just the sort of obscure and odd thing we like, but it makes us wonder–do people build little pyramids next to the Pyramids? Or is it a thing that only henges do to the mind?

And last for this post, for we find, now we’ve started, that we have more of these bits than we thought, is this card we received for winter solstice (and related holidays) from Mr. @jwisser, aka Jonas Wisser, who is, in the interest of full disclosure, the progeny of the Clonehenge perpetrator(s). He had these cards made by [name to be inserted here later because we once again did not do our homework] especially for him. The sun is rather large, but we do believe in poetic license in such cases, and we think it is a cleverly fashioned thing, all in all. Quite observant, putting the remaining three connected lintels front and center.

We will save the rest of our hengy bits for another post. That way those of you who subscribe to our feed get the thrill of yet another of our delightful posts showing up in your inbox just when you need a lift! And we get to go do something else now. Keep sending in your Clonehenge-related news! Frankly we are surprised at the lack of snowhenges this year and suspect some people have been lax about bringing them to our attention. Ahem.