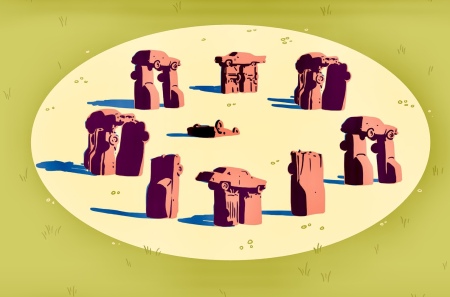 Image from the article: art by Alison Dubois

It’s in Good Magazine this month, and its title is How Stonehenge Replicas Became the World’s First Meme.

A number of people who are significant in the henging community were interviewed for this article, notable among them the irrepressible Mark Cline of Virginia Foamhenge and the fibreglass Bamahenge fame, and Jim Reinders, builder of Nebraska’s famous Carhenge. The author, Jed Oelbaum, also sought out prolific hengers of the small henge variety, long time and beloved friend of the blog Simon Burrow, and Matthew Richardson, known as Matt Rich on Facebook where he posts pictures of his endless and innovative henges.

It is a fun read for those of us who have been following henging for many years now, but the most jarring bit was the claim that some person who calls themself “Nancy Wisser” is the perpetrator of the Clonehenge blog and related Facebook and Twitter accounts. We questioned everyone on the large staff here at our luxurious suite of offices at Clonehenge, Incorporated, and at our satellite office complexes throughout the world, and no one had even heard of this alleged person.

“It sounds like a fake name to me,” said Hedgehog von Tapwater, a high-paid manager in the Clonehenge hierarchy, absentmindedly brushing back his fashionably purple hair. “And the things said about them are just absurd. Listen to this:

‘There’s almost no way to seriously research the phenomenon of Stonehenge recreations without interacting with Wisser’s exhaustive work. She might be the only one out there with enough of a bird’s-eye view of the Stonehenge pandemic to understand it. Her mix of humor and historical rigor has allowed her to build relationships with the full range of Stonehenge aficionados: astronomers and archaeological experts, compulsive micro-henge builders, and conspiracy theorists who suspect it was built by aliens.’

It makes it sound as if there’s just one eccentric person out there managing the Clonehenge empire as an unpaid hobby rather than the team of skilled experts we have monitoring the news from the world of henging 24 hours a day!”

And that seemed to be the consensus of the entire staff here. It is a fantastic, extremely well-written article, except for this peculiar detail. In fact, we recommend everyone read it and try to help us understand, if you can, how this Wisser character, whoever he or she is, wound up being interviewed about perhaps the most important topic facing the world today: Henging–why the heck is it happening and down what unfathomable path is it leading mankind?

Again, here is the link: How Stonehenge Replicas Became the World’s First Meme.

And the best part? The article does not even mention Spinal Tap! For this reason alone, we couldn’t be happier.

The worldwide proliferation of Stonehenge replicas is being recognised ever more widely. Become a henger now, so you can say you did it before it was cool!* Until next time, Gentle Readers, we wish you, of course, the happiest henging!

*It has always been cool.