from fiveandspice on food52.com

Attending a Halloween party soon? Unable to attract as much attention as shapely she-devils, vagina masks, and Boston terriers dressed as walruses? Now you can be the life of the party and wow everyone with your candy corn Stonehenge creation!!

Okay, it’s true, people may still completely ignore you, but you’ll be doing your part to bring back that old time religion and put the Samhain back in Halloween, so there’s that!

And you can send Clonehenge your photos afterward!

See another candy corn henge from 2009. And here’s another Halloween post on Clonehenge: the Witch Henge. And possibly our scariest post of all was about the Caelum Moor sculptures in Texas!

Keep safe, bring a costumed dog to your party, and until next time, friends, Happy Halloween henging! 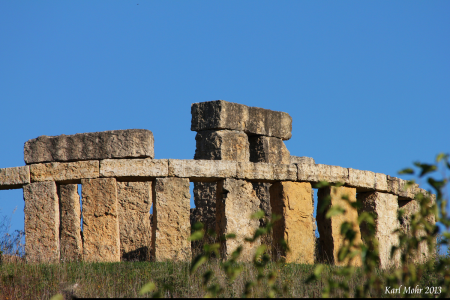 Photo of the Longhollow Road replica, by Karl J Mohr, used with permission

Happy October and welcome! When we last left the state of Illinois (almost five years ago!), it was boasting a single, rather idiosyncratic Stonehenge replica not far outside Chicago at a paragliding and flight field. That one has since gone to new owners and for all we know may no longer be there.

Illinois was chugging along with that large replica and one or two smaller museum replicas, and then in late winter or early spring of this year we heard from a fellow named Chad Delhotal, who said,

“There is a fairly large stone replica of Stonehenge on a road (could be Longhollow Rd) just north of Rt 20 between the towns of Galena and Elizabeth in northwestern Illinois. No mention of this anywhere, but it’s there.”

He sent us a link to a site that included this photo, and then managed to get us the coordinates so we could find it on Google Maps. We sat back and stared. It is rare for us to hear about a full-sized United States replica that is in plain site these days. We thought we had them all, dammit! 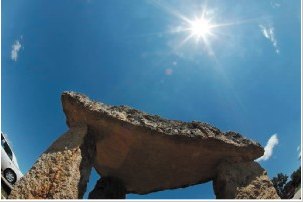 It was suspicious. When a new Stonehenge replica shows up, there is invariably an article about it in the local or regional newspaper. It’s the kind of wacky thing papers love to put in the lifestyle section, and usually henge builders like to show their henges off. There was nothing at all online about this, although there seems to be some other megalithic structure/thingie in the car park of the Irish Cottage Boutique Hotel in nearby Galena, Illinois.

We added the new henge to our List of Large Permanent Replicas and sat back, hoping for more information to roll in. Surely the Clonehenge Faithful (an imaginary fan club we talk to a lot when no one’s around) would get us more information! Right? Months went by and nothing,. Nothing, we tell you! A maddening silence of epic proportions. Dammit, humanity, you had ONE job!

Then six months later we received this email from a Karl Mohr (surely a pseudonym or maybe an acronym—let’s see…Keeping A Replica Lost…, well, maybe not.). The email said,

“I was at a scenic overlook area near Elizabeth, IL and saw a Stonehenge type of structure about 2 miles in the distance (It was barely visible to the naked eye – I caught it thru my 300mm zoom lens). I decided to drive there and snap a few shots from the road. I’d be willing to share them if you’re interested.” 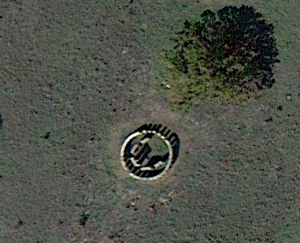 We were interested, and one of his brilliant photos is at the top of his post, another below. BUT the mystery remains. We have scoured maps and done searches, but we can’t even find the names of the people who live in the house closest to the replica, surely the first suspects we would like to interrogate. We don’t know when this henge was built, who built it, why it was built, or what it’s made of.

We can see from the aerial view that it consists of the sarsen ring and an inner trilithon horseshoe. It appears to be large, if not full-sized, and fairly new but not brand new, judging from the lack of a visible road by which the stones may have been hauled there.

Of course, the stones could have been lowered by alien space ships, but our doctor tells us not to think about things like that these days!

Someone has gone to the trouble of planning and building this Stonehenge replica in rural Illinois without seeking the spotlight, without any major news outlets picking it up, and without advertising. Why? Questions abound, my friends! But we have, alas, no answers, the definition of a mystery.

As for a score, hard to say, but it looks very nice. We award it a tentative 7 druids! For size and looks, mostly, and a little extra for the whole mystery going on.

If any of you live or visit nearby, please ask around for us and find out what the locals know! Why would you build a huge Stonehenge replica and not tell anyone about it? The force of the Stonehenge-building urge never fails to amaze.

Keep reporting those replicas, large and small. And until next time, friends, happy henging!