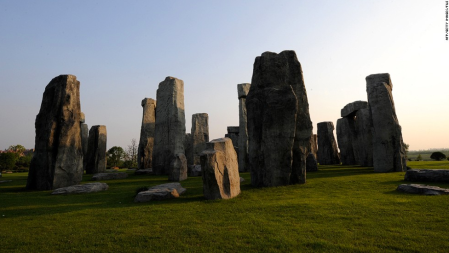 This is a new (to us) large permanent replica: number 79 for our list! We thank Hengefinder Extraordinaire Pete Glastonbury for finding it for us—and it’s a good one! This remarkable replica is in the Chinese town of Hefei, associated with a housing development. Hey, who wouldn’t want to live there??? 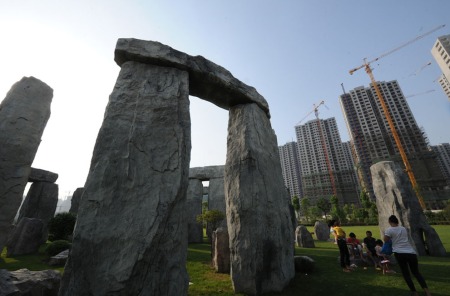 We have posted Chinese replicas in the past, small ones in those parks that are so popular there, with replicas of famous buildings from all over the world. They tend to be unusually well done, sometimes actually resembling Stonehenge itself, something that, oddly, is not that common among Stonehenge replicas.But this has them all beat. If only we knew who designed it, who built it, whose idea it was in the first place, whether it aligns with the sun’s movements, and what it’s made of. But no.

So this is brief. Score: 8 druids! Very well done! The sheer variety of Stonehenge replicas and reasons to build them continues to amaze us. Oh, the humanity! What even are we? Is Stonehenge building the true meaning of life? [hint: But, of course!]

Until next time, friends (and it may not be so long this time), happy henging!