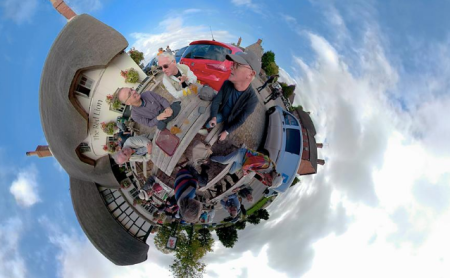 That day at the Red Lion, photo courtesy of Standing with Stones. We’re in there somewhere. 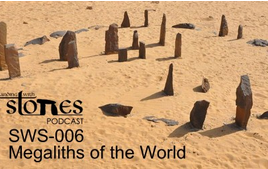 This post has been a while arriving. Way back in September, Clonehenge once again made the journey across the sea to visit old stones and old friends and meet new people. It felt like a headlong rush at the time, with insufficient sleep and more than sufficient alcohol, but it was also glorious. We would love to give you an account of it, but even our family fell asleep when we showed them the pictures, so we’ll let you off easy.

Since we’ve been home we have suffered some small-ish but distracting health problems, and it has taken us until now to get around to reflecting upon the wonder of it all. But wonderful it was, and among the wonders was the serendipity of having been staying just outside Avebury when there was a meeting planned at the Red Lion pub there, for both those affiliated with our longtime friends at The Heritage Journal and for those who made and those who admire the Standing with Stones film and podcast.

It was a treat to meet Nigel Swift from the Heritage Journal, who gave Clonehenge its first good write-up a long time ago, and a fun follow-up interview later. But we knew next to nothing, we are embarrassed to say, about Michael Bott and Rupert Soskin, who together make up the entity that is Standing with Stones. Very much to our surprise, they exclaimed upon meeting us that they had just mentioned Clonehenge on their podcast two weeks before!

Of course we have since listened to it. That whole episode of the podcast, which happens to be about megaliths around the world, is like all of their podcasts, entertaining and informative. The Clonehenge bit comes right at the end, their Bit of Whimsy. It is a delightful and flattering discussion of Clonehenge, the blog and affiliated bits. Yes, they do say we’re barking mad, and we have no argument with that, but they also call it brilliant—twice, if we recall. We’re still basking in the glow of it!

We are delighted to have met them, and it was also our very good fortune to meet the person they talk about in the segment of this podcast just before the Whimsy, what they call their Stone Head of the Month, but in this case, the Stone Head of All Time, who is founder and head of the Megalithic Portal, editor of the book you must have, The Old Stones, with information and in many cases pictures of over 1000 ancient sites in the British Isles, none other than Andy Burnham, the Megalith Master himself!

We met him. It was a good day. After all, it was due to a small competition or exchange with him in a chat box that used to be on the front page of his Megalithic Portal that Clonehenge was started at all. But that story has been told elsewhere. Among people interested in megaliths, in the U.K. and elsewhere, it is widely acknowledged that the Megalithic Portal has not only broadened horizons but changed lives. It has brought couples and good friends together and is an essential resource for fans of ancient sites around the world. Making Clonehenge possible is the least of its accomplishments.

The temptation now is to start listing all the other wonderful people we met during our trip to that fabled isle. We would love to say how delightful each one was, but the focus of this post, which has already gone on too long, is meant to be the podcast, and tangentially the meet-up, where we also had the great pleasure of the company of friends of the blog Brian Edwards and Simon Banton, and also new friends Hazel and Graham Orriss and their brilliant children.

We are flattered if not flabbergasted to have been mentioned by Standing with Stones. We are fortunate beyond imagining to have made the trip and to have gone inside Stonehenge twice, and to join friends to look for the sources of the bluestones in the Preseli Hills of western Wales. All of you who make Stonehenge replicas of every size and material have made this possible for us! We thank you.

And until next time, friends, happy henging!