photo from the website of the General Administration of the State of Washington, with permission

Okay, so it’s only a sculpture with Stonehenge references, but coming as it does from the Stonehenge State, we thought this huge untitled piece worth documenting on Clonehenge. The sculptor was Lee Kelly, an artist well known in the Pacific Northwest.

Olympia is the capital city of Washington, and this sculpture is installed near the Transportation Building on the Capitol Campus in Olympia. Stonehenge reaching right to the Capitol of the Stonehenge State! According to the website we linked to above, Kelly said that with this sculpture he wanted to “deal with the ancient attitudes of man and his relationship to what he makes with his mind and hand.” 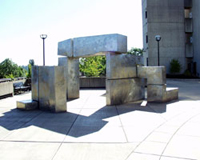 To suggest ancient attitudes, he mimics, without stating, the trilithon, in steel. It is a likable public piece. We can imagine children clambering over it and running through it. And by children we partly mean, of course, the imaginations of adults who are too stiff about their image in the eyes of others to actually do any of that. But their minds suggest it and their fingers ache to touch that cool steel.

The sculpture was completed in 1973, and we think the Seventies show in it a little, that cosmic resonance people looked for back then, the plainness and friendliness. Kelly also said about the piece, “the forms are simple in that everyone can ‘understand’ them. The mystery is in their interrelationships, the spaces they create, as well as the relationship to the building and plaza.”

Here is another work Kelly did at roughly the same time in his career, and here are other works, most of them newer. Of course, this isn’t a Stonehenge replica so it is difficult to score. Score: 4½ druids as a replica. Quite a bit higher as a piece of public art. We think it is handsome and has that quality of suggesting greater things! You can see the other Stonehenge replicas and sculptures in Washington State here. What a place for henge-ophiles!

If anyone has any replicas they would like posted, this would be a great time to send them in, as we’re running uncharacteristically low, not because of scarcity, of course, but because the photo permissions have been elusive. Come on, help us out. We’re almost at the end of our first year of posting, so you can call it a birthday present!