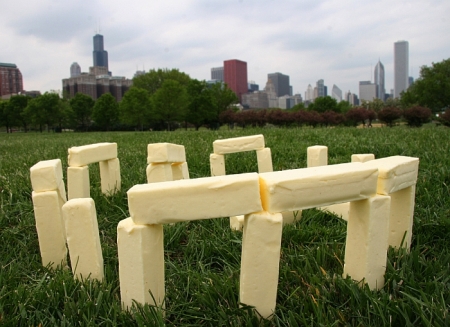 installation and photo by David Prince, with permission

Some days you just feel like a foodhenge! Luckily we’ve run across a few good ones lately. Butterhenges are not an uncommon form, what with the rectangular prism shapes that butter comes in, and its presence in most homes, including those where alcohol is also present. But this is no ordinary butterhenge, standing in the grasses of a Chicago park!

The artist, David Prince, sent an explanation that is too long to quote in its entirety, but he says the sculptural work tries to relate the experiences of daily life to the larger histories of prehistoric, geologic, and cosmic time. “I’m also interested in exploring time as something that can appear linear, cyclical, and disjointed. . .Butterhenge is a humorous investigation into these scales of time.”  He goes on to say, “I chose Stonehenge because of its relationship to butter in shape, and also its history as an archeological artifact, and its longer history as a part of a geologic process. In relating these two objects the results are comical, but hopefully lead to questions about what it means to pass through a human life on a human scale , and to question what it means for humans to fit into a larger scope of history.”

Fair enough. Probably that’s what a lot of these replicas are hinting at, although most builders never put it that way, even to themselves. It’s what makes this Clonehenge idea funny.  Score: 6½ druids. The words and the grass swayed us!

Challenge to readers: We would love to see a butter Stonehenge replica in which the butter was sculpted into Stonehenge-like shapes. See your henge featured on the prestigious Clonehenge blog! 😉