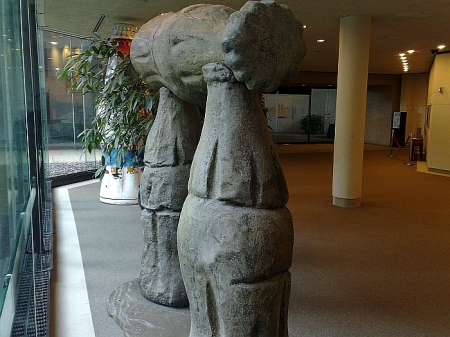 photo by Jeff Crites, with permission

The word you’re looking for is gratuitous–gratuitous use of the Stonehenge idea in a trilithon of imitation-stone Coca Cola bottles. This piece of art was donated by the U.K., one of many Coke-related artworks given to the Coca Cola company by countries around the world. We’re sure the kindness offered by their friend and ally overseas will not be forgotten by a grateful nation.

But it’s a bit of fun for us and another illustration of the pervasive nature of the Stonehenge/trilithon image. The implied assumption is that everyone knows what this is meant to represent. This is not the only soda (or pop) Stonehenge image, of course. You can see another here. Score: Does it even deserve 5? We’ll give it 5 druids–as an international gesture!