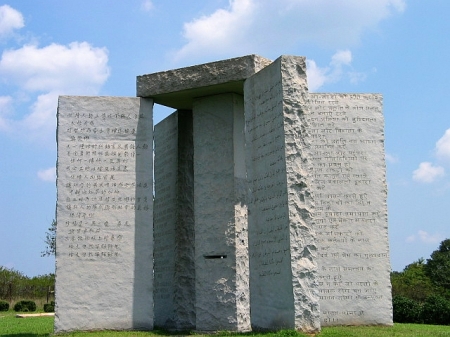 photo by Craigkbryant, reproduced from Wikipedia according to Gnu Free Documentation License, version 1.2

This was, of course, not a Stonehenge but was only on this blog because it kept getting called “America’s Stonehenge”. It was destroyed for safety reasons on the 6th of July, 2022, after it was damaged by a bombing overnight. If, like us here at Clonehenge, you did Stonehenge searches every day on social media, you could definitely see this coming. The right-wing wacko theory industry had been milking their false narrative about this eccentric monument for all it was worth, inflaming anger toward it and inciting its increasingly violent following.

The Georgia Guidestones, once standing in Elbert County, Georgia, USA, were easily the most controversial of all the sites referred to as American Stonehenges. Ten commandment-like proclamations are carved into the stones.  A radical fringe saw them as Satanic proclamations of alleged evil overlords, although it seems they were funded and worded by a wealthy eccentric as a guide to any people who might survive a global apocalypse like a nuclear war or other devastating event. Some who see the stones as evil had sworn to topple them for decades.  We had stated before that we considered the Guidestones the most threatened of the monuments we list here.

It’s a shame to lose such an odd and unique creation but we aren’t shedding any tears officially since it was in no way a Stonehenge like like the others you can find on our List of Large Permanent Replicas.  However its destruction is a warning that the far right-wing crazies in the United States are becoming increasingly motivated by the joy of violence. Anything they’ve been muttering about and threatening could be the next thing on the list including anyone striving to make this a better world.