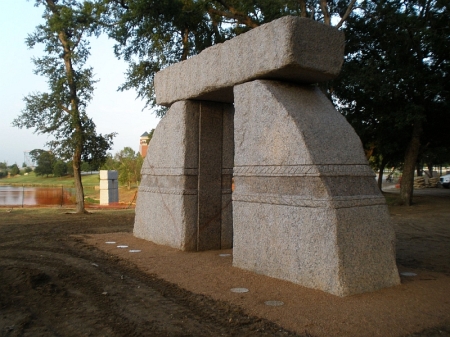 “A wee bit o’ Scotland has come to the outskirts of Cowboys Stadium, and with it a foggy auld controversy over whether a Scottish sculpture park is also a pagan shrine that might hex the Dallas Cowboys.”  “ ‘I believe there’s a devil and that we tugged on his cape.’ ” (From this article, the second a quote from Michael Tummillo.)

Ah, Texas. Welcome to Caelum Moor. Five modern megalithic sculptures made of granite, three of them trilithons, that have been in storage since 1997 have recently been re-erected in a park near Arlington, to the great joy of many art lovers and to the alarm and even anger of some on-the-fringe Christians, led by nursing home chaplain Michael Tummillo, who assert that it is pagan, therefore evil and therefore likely to attract–yes–the devil! 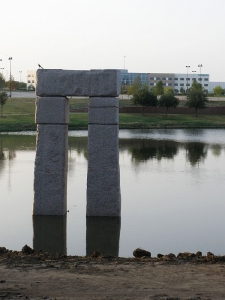 It is clear that Tummillo has more belief in the power of the sculptures than anyone else does and maybe he ought to be admired for that. Pagans, at least the ones I know, would be unlikely to expect that modern sculptures recently placed near two sports stadiums will draw in any kind of spirits, let alone a spirit who is, let’s face it, pretty much a Christian construct.

You know the drill–Tummillo and his gang somehow get from worrying about pagans and Wiccans worshiping at the sculpture park to talking about satanism, which is much closer to being a heretical sect of Christianity than it is to having anything to do with Wicca or paganism. And it all makes assumptions that don’t work, like that these sculptures are not art but religious objects, or that people won’t practice paganism or Wicca if the sculptures aren’t there.

Of course, the vast majority of Christians can enjoy these sculptures for their beauty and the resonance of ancient Britain they carry, without getting weird about it. They can instead chuckle at the bit about Scotland in that opening line above. Name a stone circle with lintels in Scotland–We didn’t think so! 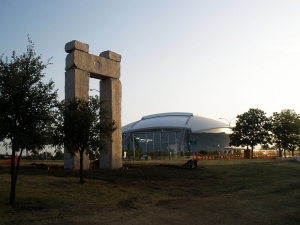 Controversy aside, the combination of landscape and sculpture in this park seems to transcend its site in the sports and business complex. You can see a walkthrough of Caelum Moor here. There is no circle, none of the other characteristics of Stonehenge, but it does have a grand feel, even over the internet. We give it 6½ druids. They’re not real druids, okay? We don’t want to scare anyone!

The artist’s name is Norman Hines. We applaud his beautiful work! And a note about Michael Tummillo: he has written a book about his experience fighting Caelum Moor the first time it was up (so we doubt he’s trying to drum up media coverage! 😉). And as for the Cowboys–their problems probably can’t be traced back to public sculpture. Just a hunch.

Our thanks to Karen Hetherington for telling us about this one. And again, we wish everyone a wonderful Halloween and Samhain!

[See the comments for a statement from M. Tummillo.]

photo by knobonk, shown by permission

We mentioned when we posted the Odessa Stonehenge that Texas was one of the states that boasts (at least) two large Stonehenge replicas. This is the other, a neat little circle tucked into the Texas Hill Country. We don’t doubt that, as the Stonehenge II website says, it makes quite an impression when unsuspecting family and friends arrive there on what they thought was just a drive in the country!

The effect is enhanced by the presence of Easter Island heads, one on either side of the henge, made by the same steel mesh and plaster method as all but one of the “stones” in the complex. Apparently a totem pole was planned, too, but couldn’t be executed before the death of the man behind the monument, Al Shepperd. You can see more of the site’s history here and here.

Another case of “Stonehenge Fever” as the Roadside America site calls it, that inexplicable something that makes Clonehenge possible. We have warmed to this circle since we first saw it. The flat pasture is a plus and the charming thought of children playing hide-and-seek among the stones is irresistible. How many replicas can allow that? Score: 8 druids for this family-friendly Stonehenge!

You can see it on Google Street View here.

photo by Texas Bob, with permission

When you talk about Stonehenge in Texas you have to specify which one. There are two–that is, two that are well-known–in the Lone Star State: one of stone and one we’ll get to another day. The Odessa Stonehenge, shown above, seems to us the nicer of the two.

Built in 2004 of limestone slabs, the monument is truer to the original than many and great care was taken in aligning it. As this article says, “The replica is across the street from society’s monuments of Home Depot, OfficeMax and Starbucks.”  Note the Texas flag waving behind the stones.

More nice pictures of Odessa’s Stonehenge can be seen here (winter comes even to Texas) and here (as does the moody dusk). While its proportions are a little off and the replacement of one slab with two detracts from the look a little, this is a remarkably impressive monument to be stuck in suburban America.  Some replica builders could learn much from it. Score: 8 druids!