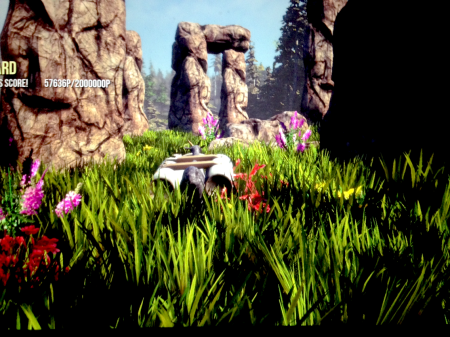 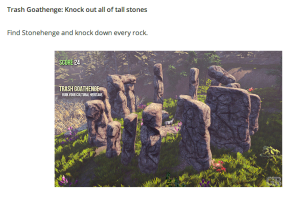 Virtual henges: no one likes to talk about them, but they are  a persistent reality in the Stonehenge replica world. Hardly a gaming world gets invented without a Stonehenge in it somewhere. Some have several—why should they be limited to one puny Stonehenge like our world is?

Maybe you’ve heard of  the game Goat Simulator. It has created a sensation in the gaming world in the short time since it was released, as much for its bugginess and simplicity  as for its game features. The game is played from the point of view of a goat and the goal is to wreak as much havoc as you can. And, of course, what would be more fun to trash than Stonehenge?? The copy reads, “Trash Goathenge: knock down all of the tall stones. Find Stonehenge and knock down every rock.” “Trash Goathenge. Ruin your cultural heritage.” We especially relish that last one. Almost makes us want to take up gaming! Actually it’s good to know that Stonehenge is still so much a part of pop culture that it shows up in games like this. And there’s something that feels right about goats and Stonehenge.

Another trendy game with a Stonehenge scene is Tearaway, a game in which everything appears to be made of sugar paper (construction paper if you’re from the wrong side of the Atlantic). Granted, you have to be watching for this one, but it’s there. In the following picture, you can see the paper Stonehenge below the main character and to the left.

screenshot from the game Tearaway

Another Stonehenge, made in this case by a friend of the blog, James Brocklehurst, can be found in Minecraft on Snakeskin. 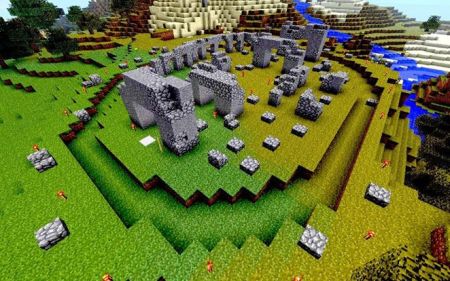 Stonehenge in Minecraft on Snakeskin, made and imaged by James Brocklehurst

It’s a little lumpy, but we’re told that underneath it is the Pandorica. If you don’t know what that is, drop your device right now and go watch the entire Doctor Who oeuvre! Not that you have to watch them all to know what it is, but it’s clear you haven’t watched them, which means you need to. Go ahead now. See you later. 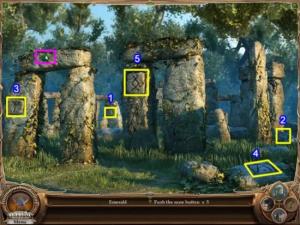 Stonehenges can also be found in games like Eternity and Mystery P.I.—The London Caper. Don’t ask us what platforms these games are on. We  don’t even know what that means. Just savour the henges, which show evidence of someone actually having looked at Stonehenge before designing them! 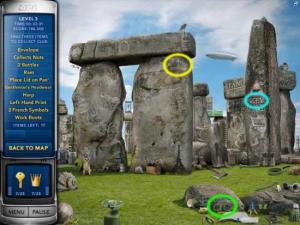 We hoped to include more in this post, but there were so many game replicas that other kinds of virtual henges will have to have their own post.We have no doubt that readers will want to tell us about Stonehenges in other games. Please do, and we’ll include them in another post somewhere down the line. So far no Easter Island heads among these. Don’t send us anything that would ruin that for us!

Our thanks to inimitable friend of the blog Jake Crimmins for sending us the Goathenge and inspiring this post! And to James Brocklehurst for supplying the picture of his Minecraft henge. We have so many  non-virtual Stonehenge replicas needing to be posted that we have probably forgotten most of them. If you want to keep up, you can join the Clonehenge group on Facebook (or—get professional help!), where they get posted as we discover or learn about them. You would be surprised how often a new one gets posted. The world has a bad Stonehenge infection, and Stonehenge pop up all over like pustules. We’re just lazy about putting them here.

Thanks for taking time out of your busy gaming day to have a look at Clonehenge, and until the next time, friends, happy henging!