cupcakes and photo by tokyopop, with permission

Clonehenge is one year old today. Happy birthday to us! To celebrate we will list a few of our favourite smaller and/or temporary henges, starting with the celebratory cupcakes above, which we posted back in March. Have one, gentle reader! 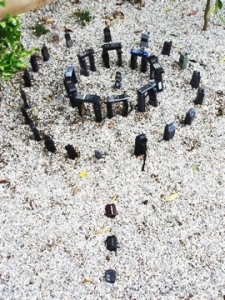 Another henge we liked was this cell phonehenge, a creation of the great henging enthusiast Simon W. Burrow. We would have to check, but this may be the only small henge that got 8½ druids. Unfortunately it seems that his photos and brilliant captions for this are no longer on Flickr.

Next we have to put a mention in for the smallest henge, a nanohenge made in Singapore by scientists testing a silicon micromachining process. They made a Stonehenge replica–what else?!

That was one of the first ones we posted–November 24, 2008. Seems like eons ago. It was only a few months ago, in August, that we posted the mosaic fruit jelly henge on the occasion of our 200th post.

Made by The Cookie Shop, a blogger in Brazil, it has to be the most colourful and attractive to the eye of all the mini-Stonehenges we posted. Yes, it’s just trilithons, but it’s candy for the eye.

Foodhenges have been among our favourites all along. Certainly baconhenge has been popular with readers. Carol Squires, its creator, and Carin Huber, who first blogged it have made a contribution to the visibility of henging, especially home food henging, on the web. It is among the best known of online henges.

And we can’t forget the Lego Doctor Who! What a great, strange, and twisted concept! The good Doctor encounters the Secret of Stonehenge, courtesy of thegreattotemaster, up there in chilly Iceland.

There are many other great and odd henges to choose from– tamponhenge, packing foamhenge, the charming fairy Stonehenge, and the well-sculpted butterhenge. But our number one temporary homemade henge is Clark Perks amazing full-size Stonehenge replica made of wooden frames covered with plastic garbage bags, built in just a few days at Bennington College in Vermont. The page he wrote about it is worth a click and read. In a way it embodies the spirit of Clonehenge!

And sadly we’ve found many excellent Stonehenge replicas that we haven’t been able to bring to you because we didn’t get photo permissions. Some, like Clotheshenge, were so good that we posted links, but for the most part we just let them lurk on the web for you to stumble upon one day and think of us.

For now, we’re thinking that a year is enough to dedicate to something like this. We will still post when something comes up and we certainly plan to judge and post the Clonehenge contest entries, but we plan to take a break from the long hours of searching for new things to post. We think we’ve made our point–people everywhere are making Stonehenge replicas out of everything.

Why? Maybe someday someone will do a graduate thesis on that and use Clonehenge as a resource. We hope so. People just laugh and shrug it off, but we think there’s something going on here that bears examining.

That said, we’ll part with links to a few nice replicas. First one of the best of the virtual 3-D Stonehenges, a small replica at a small school (scroll down), a toothpaste henge with ghost table cloth, and a smallish Australian gardenhenge that is great and somehow very funny at the same time. It’s the pansies that do it!

There are loads more out there. We’ll still post when someone send a good one in or when we hear of one we think bears mentioning, for example if Ross Smith in Australia ever releases photos of the one he was threatening to make. So let’s toast to a year of Stonehenge replicas. How about some Dom Perignon, Clonehenge-style? Cheers! 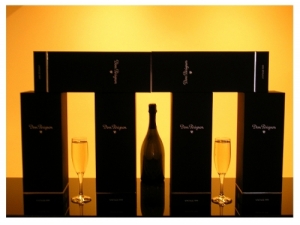 We have been saving this one because once it is posted, it is unlikely to be surpassed. Among all the small, homemade henges we have had the privilege to see, this one is a rock star. As inaccurate as it still is as a Stonehenge replica, it has that je ne sais quoi that allows it to rise above.

Listing the faults sounds petty: no lintels on the outer ring and too many trilithons in the center for starts . . . still, what it lacks in the letter it proffers in spirit. The commentary, too, enhances the installation. The caption on the Flickr photo below reads, “A closer view showing how the setting sun in mid summer shines down the avenue of pagers, through the Motorola arch and directly on the altar phone. ” There’s more where that came from.

And whom do we have to blame–no I mean thank!–for this extraordinary henge? Once again it is the work of the inimitable Simon W. Burrow and friends. Here is his Cellphonehenge blog post and here is a Flickr link from which you can click on 7 photos to read the captions.

Score? We’re giving this one 8½ druids. If only they had dug a little ditch and bank with a stick or something . . .