Just a brief note. The link above leads to a great bit of video about Achill Henge, on the island of Achill, in County Mayo in Ireland. For those who don’t know, this was built surreptitiously by Joe McNamara, possibly to represent the tomb of the Celtic Tiger, the days of Ireland’s great prosperity. Mr. McNamara is the only person we know of to be arrested for henging, and he has since been ordered to take the henge down, so far, apparently, not complying. We have done a number of posts on Achill Henge and the controversy surrounding it. Here is the first: Achill Henge.

Not only does the video contain an interesting discussion of the monument itself, but the video of Achill and the sea around it is stunningly beautiful! If we could manage it, we would organise a Clonehenge tour to Achill!

We hope to have another post up by Valentine’s Day. Wish us luck! And until next time, friends, happy henging!

photo by seequinn on Flickr, used according to permissions

News on Joe McNamara’s structure on the Irish island of Achill, nicknamed Achill Henge. Mr. McNamara has been ordered to take down Achill Henge, pending a planning board ruling on whether the structure should be exempt from the need for planning permissions.  We like the last sentence of the article: “Locals in Achill have speculated that it is ‘unlikely’ that McNamara will take the structure down.”

We know, we know, it’s none of our business, and people have a right to have their laws followed, but we just want to know what it was for and what the henge was suppose to look like when completed! Plus, let’s face it, where else in the world is there a greater advocate of Stonehenge replicas than here on Clonehenge? Our motto: Bringing you global news and intelligence on Stonehenge replicas in the internet since 1784!

Signpost to Achill Henge, again by seequinn on Flickr (We love this!)

1784 was a good year on the net. We remember the first time we got Wolfgang-rolled…  But enough nostalgia.

While we’re posting for the first time in a while, we thought we would pass along some henge pictures posted for us by Facebook friends of the blog but without much provenance. If you can help by bringing us more information on these, please do. You can reach us on the Clonehenge Facebook group or at the email address on the sidebar.

A glass trilithon posted to the Clonehenge Facebook group by Bruce Bedlam of Stonehenge-is-a-building fame. Elegant.

and this cakey henge was sent us by friend of the blog Jez Reell. All we know is that it was created by Dominic Wilcox for Jaffa Cakes out of Jaffa cakes. What we like best about this is the reflection of the circle of trilithons on the plate. Well photographed! [Update May 8, 2012: We found the back story for this one here, thanks to Mike Williams–the shaman-y one.]

One more note before we go. We actually received an email from someone at CBS Sunday Morning, a news program in the States, asking to interview us in relation to a piece about what is real and what is fake. We sent our contact information, but they never got back to us. We now suspect that what they wanted was not an interview but a replica of an interview. They were right not to call back. Interview replicas would be a whole other blog!!

So keep your eyes open for new henges. Whether or not you are in County Mayo, have a good Saint Patrick’s Day tomorrow. And until next time, happy henging!

P.S.: If anyone knows the lastest news about or the current state of Achill Henge, a comment about it would be much appreciated. Thank you! 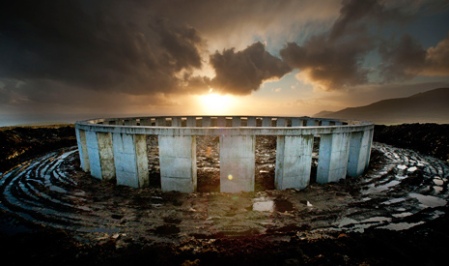 photo from the Mayo News

Over the weekend, guerrilla henging was taken up a notch–actually, many notches!– as the construction above was put up in very short order. We will do a proper post another day, but for now we quote the article:

“A massive Stonehenge-esque structure has appeared on an Achill hilltop over the weekend. The man behind the clandestine project, the purpose of which remains unclear, is Achill native Joe McNamara, also known as ‘The Anglo Avenger’. The structure – dubbed Achill-henge – was built without planning permission. Towering nearly 15 feet from its base, it is 30 metres in diameter and has a circumference of close to 100 metres. Over 30 articulated trucks arrived in Pollagh on Friday from Galway carrying pre-cast concrete, and work began in mid-morning…

Reportedly over six months in planning, the enormous circular structure, which is located on commonage land above Pollagh, was erected at great speed but with a high level of precision. A group of men, with McNamara in charge, worked long hours over the weekend on its construction. The projected cost of its manufacture and installation is believed to be in excess of €1 million.

It is believed that the sun will rise and shine through the gaps between the ‘stones’ to light up a centre-piece on the site – a centre-piece yet to be built or revealed. What can be seen in the centre is a semi-circular outline for some sort of structure, but what shape or form that will take is unclear. It is believed that it won’t form part of the current development at Achill-henge but may be installed later.”

Fascinating! We eagerly await further developments. And, Mr. McNamara, we would not object to an exclusive Clonehenge interview. How often does henging meet the law? Any guerilla henger is a friend of ours! Henging–is it a new way to Occupy?

Our thanks to Barry Teague and Pete Glastonbury for alerting us to this news. If it is allowed to remain there, this will, of course, be added to our list of large permanent replicas, our first in Ireland.

Until next time, friends, happy henging!