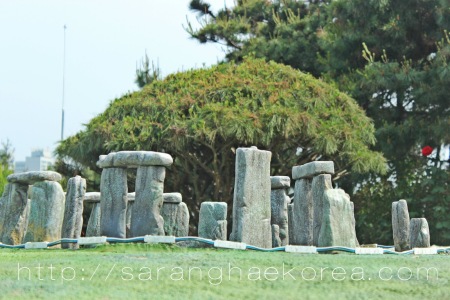 Thought we might put up a quick post for old times’ sake. We passed our seventh anniversary earlier this month, and in those seven years the world has become ever more filled with Stonehenge replicas, some might say to an alarming degree. Here on the official blog we have not kept up, but posts continue on the Clonehenge group and a related group for and by hengers themselves called the Will It Henge group on Facebook. We hope to feature an interview with a dedicated henger from that group in the near future!

Today, however, we feature a new permanent henge, large enough, we think, to make our large permanent replica list, in South Korea. It is part of the Aiins World miniature park, another of those parks that feature miniature models of famous landmarks from around the world. We can’t tell from this picture just how miniature this is, but it appears to be a few feet high, and that’s good enough for us. We hereby declare it large and permanent! Our thanks to Saranghae Korea for permission to post the photo. 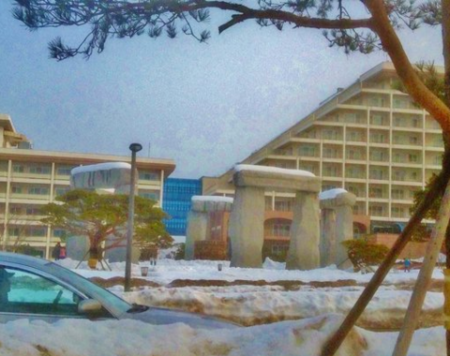 But now that we have that out of the way, let’s talk about South Korea for a moment. We posted the Paju City Stonehenge at a pretend English town in South Korea on this blog years ago. We have heard rumours of a Stonehenge in the centre of the hotel complex at Del Pino Golf and Resort in Goseong-gun. That one looks very nice, but no explanation has been forthcoming.

And there is another, well, actually just a trilithon, but Stonehenge-like enough to satisfy us, in Gang-hwa goindolgun (photo at link). Gang-hwa goindolgun has other megalithic replicas, including an alignment like Carnac. We would definitely visit this place! This makes four Stonehenges in South Korea, that we know of! Is there something going on over there that we should know about??? Why all the Stonehenges, South Korea? This makes it the Stonehenge capital of Asia, much as Germany is for Europe. Well done, we must say!

We’re sure there are Stonehenge replicas and models we have yet to learn about. Not everyone in the world has been alerted to the importance and supremacy of the Clonehenge blog when it comes to reporting Stonehenge sightings. Please help us out by telling people to submit their information and pictures to us on the Clonehenge Twitter and/or the Clonehenge Facebook Group! We can’t emphasise to you enough just how important this is!*

Meanwhile, South Korea has quietly been doing its part. Let yourself be inspired to take up the banner. What could there be but peace and respect in a world full of Stonehenge replicas?

*because, to be honest, it is actually not all that important.

One thought on “Why All the Stonehenges, South Korea?”