photo from Newgrange.com While we’re hanging out in Pollagh waiting to see what happens with the henge and what Mr. McNamara has planned for the center of his circle, we may as well pop over to the eastern side of the fair isle and have a look at the magnificent (if perhaps not completely accurate in restoration) passage tomb of Newgrange in the Boyne Valley. 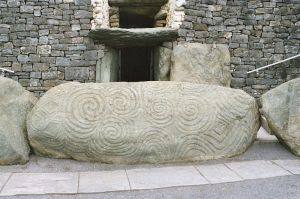 Although this is a blog about Stonehenge replicas, regular readers (it’s a harmless fantasy–permit us to keep it!) know that from time to time we post replicas of other megalithic sites. As a matter of fact, one our favourites has also been Irish–the wonderful bouncy dolmen modeled after the Poulnabrone Dolmen in County Clare. The Newgrange site, part of a larger Stone Age landscape in the Boyne Valley that includes the Knowth and Dowth mounds as well as other elements, is one of the oldest and best known Irish sites, so there are bound to be replicas. And here we see something unique–a  full-scale model built right alongside the original! The description of the Newgrange Lightbox Project on Newgrange.com reads: “Niall Martin from the RTE TV programme Nationwide conceived a project to re-create the Newgrange lightbox, passage and chamber at the Winter Solstice. The Lightbox is an opening above the entrance to Newgrange, Archaeologists refer to it as a roofbox. The Lightbox and passage are aligned to direct the light from the rising sun around the Winter Solstice down the passage, lighting up the main chamber.”

The picture at the top of this post is the replica and the second picture is the real entrance to the passage tomb. Nicely done! In the picture on the left you can see the project in construction right beside ancient Newgrange itself. Unfortunately it appears that Ireland’s notoriously changeable weather did not cooperate with the researchers, but as Clonehenge we are more interested in the look of the thing. We think they did a lovely job not only on the entrance portal, but also on the famous entrance stone, a stone that we found fascinating a full forty years ago and which is still one of the most extraordinary bits of rock art in the world. This stone single-handedly (if stones have hands) made the triple spiral a symbol of Celtic culture, completely disregarding the fact that the building of Newgrange took place at least a thousand years before Celtic culture reached verdant Hibernia! 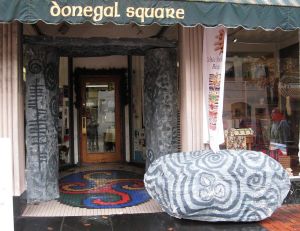 And while we’re on the topic, look at this! True, it is not so much a replica of Newgrange as a sort of jazz improvisation on the idea of Newgrange. Still, when we ran across this in Bethlehem, Pennsylvania a few weeks ago outside a shop that sells things from Ireland, we were delighted. It isn’t often that we actually see a replica of a megalithic site in person. And despite the liberties taken, it still has that Boyne Valley feel! We liked seeing an imitation of the glorious entrance stone. We’re told that the creator of this bit of whimsy is named Neville Chandler. Well done, Neville! And thank you. Anyone wanting to see the stunning light effects at the real Newgrange around winter solstice should have a look at this page. No chance for this year, but you can already sign up for a the lottery for a chance at a visit next year. Or why not start working on a replica of your own! We have resorted to noticing where the winter solstice sunrise light falls in our kitchen at home. After all, every inch of the earth is just as old as it is in the Boyne Valley and on Salisbury plain, right? Be your own sacred site! Until next time, friends, have a lovely pre-solstice season, and—happy henging!