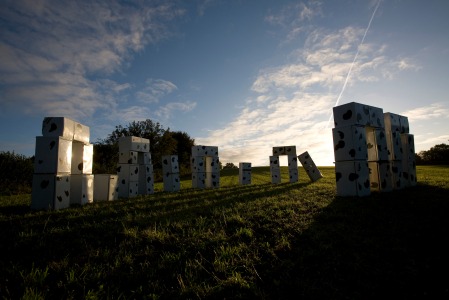 We’re late with this one. It’s already gone. Unlike the other Stonehenge on the A303, this replica built of refrigerators was a temporary construction, unveiled on the morning of September 22, 2009, and removed on the 29th. Our thanks to a number of people, including Andy Burnham of the Megalithic Portal and Pete Glastonbury, ancient-sites photographer and friend of Clonehenge, for bringing it to our attention!

The Organic Milk Cooperative stated: “Fridgehenge is a monument to organic farming and is intended to symbolise the natural goodness of milk that’s been produced on farms that don’t use artificial chemicals and pesticides.” In an added whimsical gesture they painted each of the more than 30 recycled fridges with a cow-like spot pattern. Which, despite its non-circular design and simple trilithon construction, makes this a unique and likeable replica in our opinion!

Promoting organic milk is still another new reason for building a henge. Communications manager for the group said, ““We are very proud of ‘Fridgehenge’ and hope it helps to inspire more people to drink organic milk . . .” To be honest, we’re not sure it works for that sort of thing. But we do know how it is when you’re struck with the compulsion to build a henge–you’ll reach for any rationalisation that allows you the illusion that it was your idea. No ancient monument tells us what to do, eh?

We’re inspired by the placement of this fridgehenge. Immediately we begin to imagine the A303 becoming a sort of avenue of the henges with people building replicas of every size and description along the highway leading to and away from the real thing. True folk art of the most peculiar kind–archaeologists would have a cow!

Score: 7 druids. We wish the builders well and hope the Old Gods hear their plea.

[Other fridgehenges have also been temporary: one in Santa Fe, New Mexico and one in New Zealand (outside link with no photo). And we doubt we’ve seen our last!]

One thought on “Fridgehenge in Wiltshire: Organics on the A303”