ATSA, the creators of this replica or sort-of replica made of garbage, stands for Action Terroriste Socialmente Acceptable, meaning, as far as we can tell, Socially Acceptable Terrorist Action.This is probably one of the most interesting and provocative uses of the Stonehenge imitation we have seen. 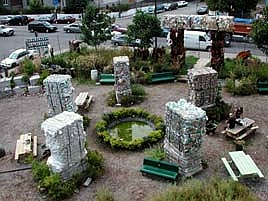 This construction was created, again, as far as we can tell, in the city of Montreal in 2002. It was part of a piece of urban art called Parc Industriel. The ideas behind it were complex, but to simplify, the Stonehenge structure is used to evoke the idea of looking back on our culture from the far future and finding that the monument we left was not a great and timeless work like Stonehenge but our massive accumulations of garbage.

As we say, that is a (gross) simplification of the message, but you can learn more by poking around the ATSA site.  We like the sub-title: When Humans Were Still Able to Reproduce Naturally. They even have a panorama, video and soundtrack here. It’s all very impressive. Not optimistic, exactly, but . . .

A quote from the site: “This temporal “jump” gives us the perspective of a fait accompli, allowing us to look at the facts from a neutral, even humorous point of view, one that encourages reflection and gives us the distance we need for self-criticism.” And a partial description: “An arched doorway built from masses of compressed metal and paper leads us to a body of polluted water, surrounded by columns of recycled material that remind us of Stonehenge (a metaphor for how truly infinitesimally small our existence is).”

Stonehenge as a metaphor for how infinitesimally small our existence is . At first blush that sounded new to us, but wait–isn’t its unwieldy age, size and ponderousness what all the humour is about when people build mini Stonehenges of butter or candy or biscuits? Like, “OMG, I can’t think about life and eternity and death but I can think about bourbons and custard creams!” [USAnians–those are varieties of what you call cookies.] So ATSA is using that same connection but plunging and twisting the irony a little deeper in our guts.

Score for this henge-with-a-message: 7 druids! We’ve seen a lot of replicas and this is a standout, demonstrating for us once again the malleability and broad applicability of the Stonehenge image. Like Indo-European root words that form many seemingly unrelated modern words, Stonehenge can lend weight and import to many different kinds of statements. Its ancient age and ruinous beauty arrest our attention and ask us to (HELP! PLEASE!! NO!!!) think.