photos from Lizard-Landscapes.com, with permission

“You know you’ve always wanted to build a model Stonehenge…” How can we resist posting a model Stonehenge from a page that begins with those words!? This website has a page telling how to create a Stonehenge model for a pet who is ordinarily confined to a cage or dry aquarium. And it’s brilliant!

Poor creatures–after all, what are the chances they’re ever going to get to Wiltshire? Srsly? So it’s your job to bring Stonehenge to them. And luckily for you, Andy, the proprietor of Lizard-Landscapes.com, is amazingly good at making faux stone things and demonstrating how to do it. There’s even a step-by-step video! Check it out here: How to Build a Model Stonehenge. 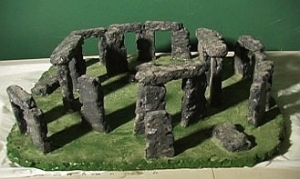 As sometimes happens, we started out chuckling when we first stumbled across this (Stonehenge for your lizard? Rly?), but upon closer examination, we were impressed. He looked at Stonehenge. Carefully. He says the word sarsen, and would have said trilithon if he’d known the word. He was reaching for it, but could only come up with “Stonehenge structures.” The point is, he noticed. Well done, sir!

And he says, both in the text and on the video that “You know you’ve always wanted to” make a model of Stonehenge. Ha! This strikes at what we refer to as the Clonehenge mystery. Yes, for many people this has the ring of truth, but why? Why have so many people always wanted to create a Stonehenge model? Why does it turn up everywhere? It is a question we ponder. Instead of doing anything worthwhile.

In the meantime, it’s worth watching the video just to see the green anole  (the lizard above) leaping from stone to stone. No doubt this is how it was when Stonehenge was built, back in the age of the dinosaurs.  (You didn’t think men coexisted with dinosaurs? See the proof here!) And, although unrelated to dinosaurs, be sure to check out his miniature city page, if only to see the lizard rampaging through the streets when it’s finished. If you’ll pardon the expression–Cool!

Score: 7 druids. We love being surprised and entertained. Hmmm . . . maybe we should build a Stonehenge for our cat. Or better yet, in the local elementary school playground. So many replicas needed, so little time!

One thought on “Polystyrene Henge–Stonehenge for Lizards!”