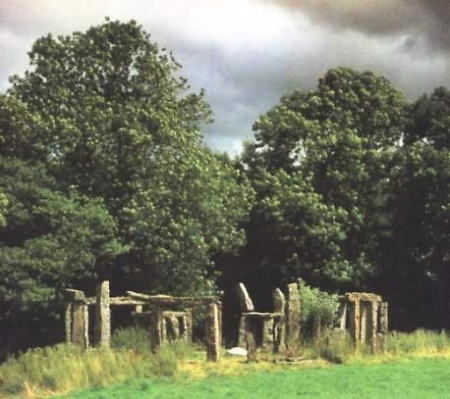 photo from this page of a Polish site on Stonehenge

Today is the one month anniversary of the start of Clonehenge and our 50th post. We did finally find some Stonehenge replicas from Antarctica (guess what they’re made of!), but permissions for the photos have not come through, so we will instead post the earliest Stonehenge replica we can find a picture for, a folly built near Quinta House by Major Richard West, somewhere around 1830. One reference says it’s in Shropshire, another says Denbighshire. [And word is in–Shropshire it is!)

If you’re interested in Stonehenge replicas, then be sure to click on the link in the caption,  the replica page of Krzysztof Kułacki’s Stonehenge site.  It’s a very interesting site and he has some different replicas on his list, including this one. There’s more info on this replica in this book, by Aubrey Burl.

Compared to some we have seen in the last month, this is a weak stone circle, but being the earliest of its kind (that we could find) helps it with the judges. Score: 8 druids for this forerunner henge!

And thank you to any and all readers and contributors out there for joining us for the first month of fun. Many more to come, although posting may slow somewhat from now until the New Year begins. Tomorrow is solstice, isn’t it? We may look at a different kind of Stonehenge replica for that.