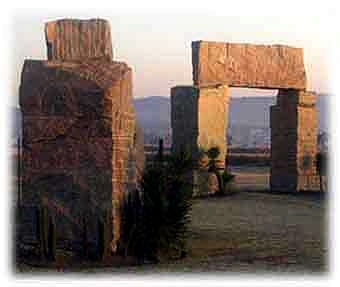 We’ve posted Stonehenge replicas from Europe, North America, Asia,  and Oz so far. We’ve had New Zealand, too, but if we’re checking off continents only three are left and we would like to cover them all. Fortunately for us, not far outside of Johannesburg, South Africa, in Parys, Gauteng Province, there is a lodge and conference center called–you guessed it–Stonehenge, and, as the ad says, “As Guests enter Stonehenge, they are greeted by large replication of the celebrated Stonehenge Monument and throughout the complex natural, strategically placed granite plinths reinforce the African Ambience.”

OMG, score! The picture above is the only one we could find, so we don’t know if the ‘replication’ consists of more than two trilithons, but that’s enough for us to count it. They’re actually nice big square trilithons that put us in mind of the Montana Stonehenge, except for that lovely pinkish cast. (We’re waiting for photo permissions, but will get you Montana’s one of these days so you can compare.)

It’s impossible to score this accurately since we don’t know how much more of it there is, but, hey, we’ve never scored accurately before,  so why start now? Score: 6 druids, plus an extra  ∏ for being in Africa! Anyone who can direct us to replicas in Antarctica or South America gets . . . a handwritten note and our eternal gratitude, or something cooler if we can think of it. Get someone on the space station to make a henge and get us the picture and, Wow! We’ll be like BFFs forever! Srsly!!!