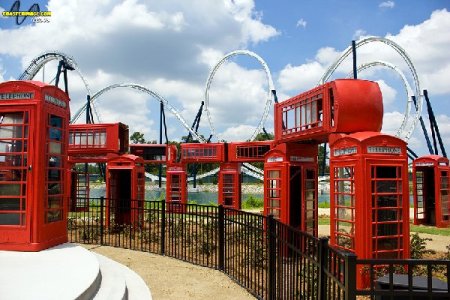 A rock-and-roll-themed amusement park near Myrtle Beach, South Carolina includes this curious structure, entitled Phonehenge, as part of their British Invasion section. Of course this is not the only type of phonehenge out there–cell phone henges made at home are another interpretation of the subject matter.

It was touch-and-go at first, but we have slowly come to realize that we like this structure despite its obvious failings. It’s only a half circle, making room for the performance space and yet in a whimsical gesture they include three inner trilithons. And there’s something about having each ‘stone’ be a contained space that one could enter . . . perhaps more could be done with that idea.

But we digress. 6 ½ druids for this quirky henge!