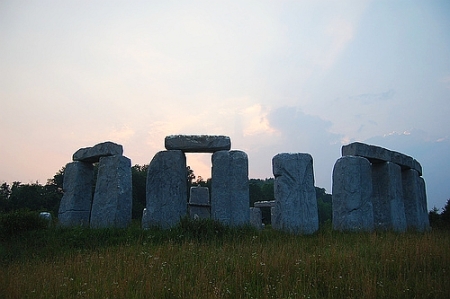 photo by 100wordminimum, with permission

A classic American Stonehenge replica, Foamhenge, once located in Natural Bridge, Virginia, and now relocated to Cox Farms, Centreville, Virginia, was built by Mark Cline, an appealingly nutty artist (note that these things are generally built not by mystics or druids, but by artists, engineers and scientists), intentionally as a tourist attraction. A Renaissance festival called The Enchantment Faire at Foamhenge is held here once a year, although not at solstice.

This replica is full-sized and Cline made an effort to copy individual stone shapes from Stonehenge.  Kudos to him! So many Stonehenge replica builders seem to never even bother to check what Stonehenge actually looks like! Cline also created the remarkable Bamahenge, a fiberglass Stonehenge in Alabama, complete with dinosaur replicas!

For the curious, see the plaque that was at the monument before it was moved here, and a nice dawn photo here. We chose the picture above, which captures the sense we get from some pictures of Stonehenge, a sense of the stones as great old beings huddled together to discuss deep and timeless secrets. At Foamhenge, though, whatever they’re discussing, we know it’s nothing heavy! Score: 6½ druids for the big henge and we would love to get a better look at that mini-Foamhenge in the Mark Cline link above!

Also, at this Smithsonian link, scroll down and click on the video with the flaghenge for some information and a short interview with Mark Cline about his creation. Fun!