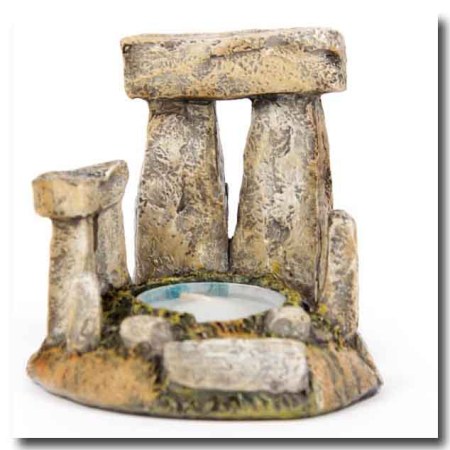 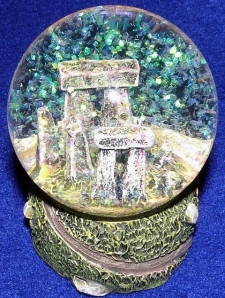 Remember that snow globe we posted a few days before Christmas? This appears to be its second cousin, with trilithons based on the same model, just enlarged and moved around a bit. And it comes in what appears to be an identical box.

We can’t seem to wipe away the impression that what we have here is a mommy trilithon, a toddler trilithon and a few little trilithon buds. Drink your candle wax, kiddies, and one day you’ll be big like Mum! And yet the whole thing has its charm. That grassy lip around the candle works to make it look like a secret pond surrounded by megaliths, the kind of thing you wouldn’t mind having in your garden.

This can be seen as a reductionist view of Stonehenge, a minimal version of the circle, just enough to satisfy the casual Stonehenge fan who wants to tuck a reminder of the ancient and the ages off on the desk corner. Someone’s taken the time to make the resin stones stone-ish and aged looking. (There’s something bugging us about those three front stones, however, but we can’t quite put our finger on it.)

All in all, an amusing Stonehenge-thing, if taken with a wink. Score: 5½ druids. And the name IS Stonehenge, by the way. No space in the middle and no capital H. If it had been named in the 1990’s of course, it would be StoneHenge, but for now English Heritage is sticking with the old spelling. We quite approve!