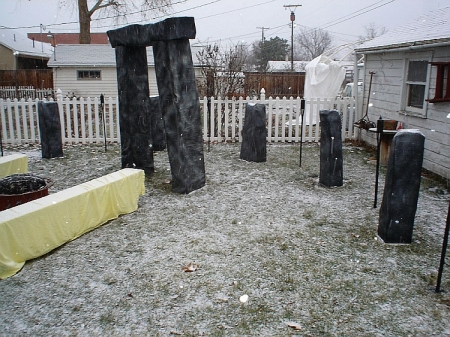 photo by littlemysteries, with permission

What kind of secret waves are broadcast through the air in Washington State? It has become Michigan’s only rival for the slogan, The Stonehenge State. (See the Clonehenge page, The 44 Large, Permanent Replicas) We’ve heard there may be another Stonehenge replica outside Seattle and believe me, we’re looking into it.

This henge was temporary, though, and only a partial one. It was built in a backyard in Clarkston, Washington, littlemysteries tells us, “for a Winter Solstice gathering and ritual,” out of  “wire, papier mâché [re-spelled by us just because we like diacritical marks], old wallpaper, and paint (and possibly other materials, I’m not sure)”

Remarkably, this is the only case we know in which the replica was privately built for a solstice ritual. We’re lucky to have a record of it.

Score: 6 druids, at least one of them awarded for the motivation of the builders. It’s good that Washington supplies the West Coast with henges, because California and Oregon seem to be falling down on the job.

P.S.: littlemysteries, we see those melting peeps in your photostream, and the peepicide, too! Frankly your peep-related behaviour worries us a little. Is one being drowned? And what’s with the tag peepdeath?! (What is it about peeps that spurs violence? See the bottom photo on this PeepHenge page.)