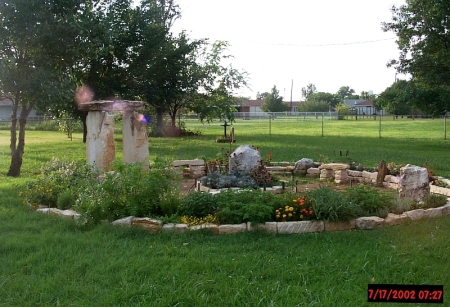 photos and henge by Thomas, and Power Feng Shui, with permission

Building a large trilithon of stone is no easy task. The stones  have to be much larger than the portion visible above ground, and stone weighs a lot. We bring this up in order to underline the respect due to anyone who manages to build a large stone replica, no matter what the motivation.

And we bring that up because we suspect there are some among our readership who may be inclined to jeer, to cavil, indeed even to scoff, at the stated motivations of Thomas, the man who imagined and then built the replica above. He gives an explanation at this website, and in it he mentions Celtic magic and power and a bridge to the underworld, spirits and elementals–even white robes. 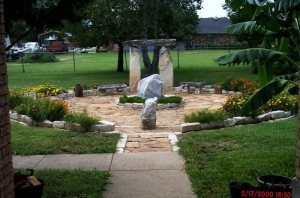 We’ve made the argument often that the Celts and druids could not have built Stonehenge, having arrived at least a millennium too late, but that does not technically preclude the possibility that those descended from Celtic peoples have some blood of the megalithic builders in their veins.  Celtic culture could have arrived as a style embraced by the indigenous people of the isles, rather than as a race who arrived to exterminate them–and some DNA testing suggests that is precisely the case. 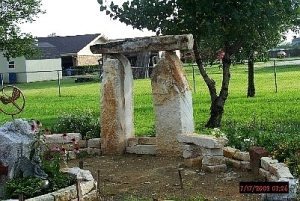 So scoff if you must, scoffers, but in the henging world there are many mansions and all who henge are welcome. You can read more by and about Thomas and his henging inspiration here.

Score for this nice garden trilithon and stone circle: 6 druids. He included a heel stone and a few small bluestone-like uprights. And to be honest, we would be thrilled to have this in our garden, an intimation of a magical world. We’re also thrilled to have another large, permanent replica!