Here is one for the record books. Only once before, during the first month Clonehenge existed, did we post a replica that was actually at Stonehenge (Straw echo henge–wow,our posts were short back then!) Here is another one, this time, in keeping with our film and movie theme of late, from a CBS TV special made in 1964 called (like so many other things) The Mystery of Stonehenge. 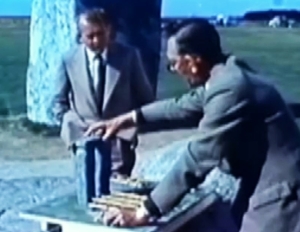 It happens that a contributor to that TV special, Gerald Hawkins, author of the well-known book Stonehenge Decoded (one of those books that has been on our shelves for so long that we couldn’t say when we bought it!), was an acquaintance of our friend and frequent contributor Mr. Pete Glastonbury. Mr. Glastonbury uncovered a copy of the film in Mr. Hawkins’ archives and sent us the link to this delightful bit at Stonehenge in which Professor Richard Atkinson explains to a CBS reporter how he thinks the monument was built, putting a trilithon replica together in the process. (In the smaller photo here you can see a real sarsen upright in the background.)

What can we say? For the Stonehenge replica nerd, this is about as good as it gets–a renowned Stonehenge scholar putting together a Stonehenge replica at Stonehenge–on film. Score: 7½ druids! It’s great, true, but that’s as high as we can go for what is only a miniature trilithon.

This probably won’t be the last of these old-ish films. We’ve read that Hawkins was filmed explaining his theories using a plastic Stonehenge model and some lighting to simulate the sun shining into the monument at different times of year. If we can find it, we’ll post that, too.

Meanwhile, if all this academia is making you homesick for good old Spinal Tap, here is our post on that. We don’t want to stay too serious about Stonehenge replicas, dudes and dudettes. They are inherently silly things.

Note added later: Oddly, completely by coincidence, Stonehenge Collectables’ latest addition to their site is a press release and TV Guide listing about a rerun of this CBS special in 1973. You can see it here.