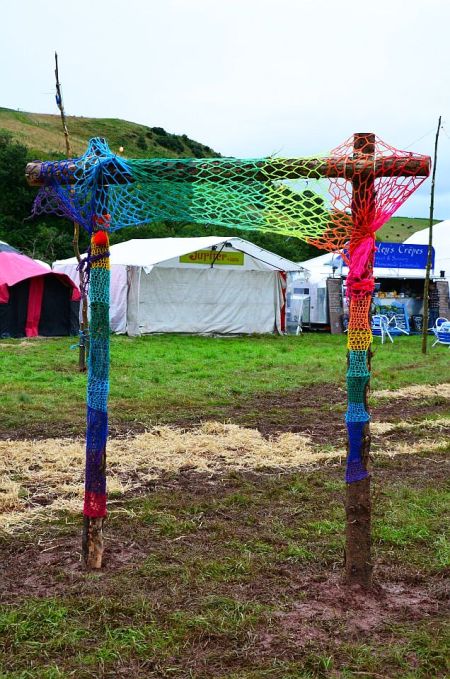 One trilithon of the Audio Soup Henge, decorated

Back after our delightful holidays which included a funeral, an alarming incident in which we fell on our faces, and a bad cold. If you hear us coughing or sniffling during this post, kindly pretend not to notice!

We know of two henges built for festivals this summer, although there were almost certainly more somewhere. The trilithon in the photo above belongs to one made by the infamous Henge Collective for a music festival called Audio Soup in Garvald, East Lothian (that’s Scotland, for those who are opening a tab for Google just now). interestingly, they were invited to henge at the festival, the first instance we’ve heard of public henging by invitation!

We know what you’re sitting there thinking. It doesn’t look much like Stonehenge. True, but you have to understand that the Henge Collective are sort of the Impressionists or almost Abstract Expressionists of the henging world. They deal in nuance, subtly suggesting Stonehenge rather than blatantly coming out and screaming it. At least that is what we choose to believe!

We do like the knit or crochet decorations. We are of the school who believe that originally the stones of Stonehenge were decorated, both permanently in some ways and seasonally with more colourful and perishable things draped and laid at their bases, so we find this fitting.

As for score? 5½ druids for the bold hengers! We are excited for them and pleased that henging by invitation is now a thing! Who knows where this will lead? Hengers invited in by the United Nations? Or Parliament? Hengers at sea? Henging by robots on Mars? The possibilities are endless.

Next up: Burning Man and its henge tradition. Until then, friends, happy henging!