“The Secret Life of Machines is an educational television series presented by Tim Hunkin and Rex Garrod, in which the two explain the inner workings and history of common household and office machinery.” So says Wikipedia and why should we bother to reword it just to sound like we’re not quoting it? 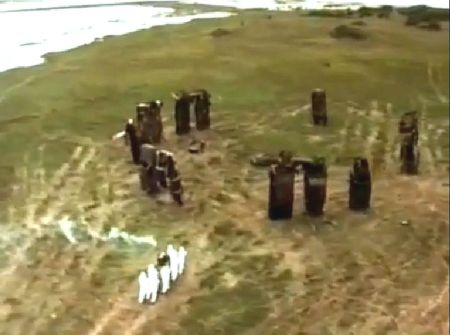 Friend of the blog Josteyn Ward [about whom we know things you would not want to know about your friends!] posted this video and its henge on the Clonehenge Facebook group along with its partner video which shows a car engine, clearly meant as a sacrifice, being carried into the henge by people clad in white, starting at about23 minutes 45 seconds in. Brilliant!

On the website, they have this: “We made carhenge for the car and engine programme. There are several permanent carhenges in the world, most famously one in the US desert. Ours only lasted two months, but it had a good site, and many people made pilgrimages to it from the main road a mile away. It is best seen in the opening shot of the car programme.”

We are amazed that we never heard of this autohenge before now! It is extremely rare for a television show to make and feature its own Stonehenge replica. The history of henging has many hidden corners. Score: 8 druids, as much for the procession and sacrifice of the internal combustion engine as for the Stonehenge replica itself!

This idea of Stonehenge as a place of human sacrifice persists, but happily it is not taken as seriously as it once was. It makes an excellent basis for jokes. Nothing tickles the funny bone like an innocent person being laid out on a stone and eviscerated before a large crowd! Possibly our friend Josteyn Ward would want to speak to this. Possibly. But we don’t actually want to know.

Until the next time friends, happy henging!