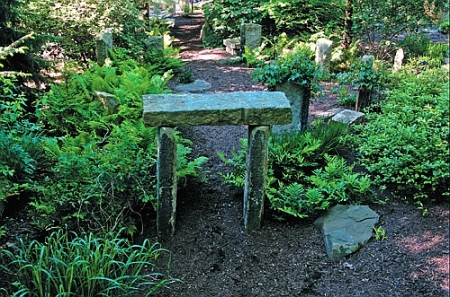 We know the word Foxhenge sounds exciting, but think about it–how would you keep the foxes still?! This one is called Foxhenge, jokingly, because it is in a garden called Fox Chapel, built by Stephen and Kathleen Guinn. The article says, “the circle is composed of seven uprights, two of which are connected by a lintel to form a gateway.” A trilithon.

We’re not sure of the trilithon’s size, but we’re pretty sure this part of the article is true:  “While Stonehenge was surely an engineering feat in its time, the invention of the backhoe made Foxhenge somewhat less labor-intensive.” That is, unless it turns out Merlin did transport the sarsens magically!

The “henge” includes five other uprights. We include it to show that you can incorporate Stonehenge-like elements in your garden without being too literal about it. It’s not a real Stonehenge replica, but it certainly looks like a cool, peaceful place to be on a hot summer day.

Score: only 4½ as a Stonehenge replica. But we’re hoping we’ll see more garden megaliths as time goes on. We would also like to mention the Columcille Megalith Park near Bangor, Pennsylvania. Their beautiful megaliths are truly mega, including a wonderful trilithon, although it’s not a Stonehenge replica. A post on that will have to wait until the truer replicas run out–no time soon, it seems!