There are certain Stonehenge replicas that cause us to let out little chirps of sheer joy. The best example of one that made us insanely happy is, of course (as we are sure you will recall) the Taipei interactive Stonehenge sculpture. While the replica in this post doesn’t detect your approach or talk to you the way that one does, it is still squeak-worthy. Allow us to present to you… (drumroll) Citrus-henge!

Yes, ladies and germs, that is a Stonehenge replica made of lemons, limes and oranges. In France. We don’t ask for these things. Honest. People just can’t help themselves.

The story is, the French town of Menton, on the Riviera very near the border with Italy, has a lemon festival every year in late February and early March, featuring large floats with structures made of citrus fruit. Each year it has a different theme,this year’s being Great Civilisations. And there amidst the Babylonians, the Vikings, the Mayans and the Greeks, voila! someone did a Stonehenge.

Come to think of it, we may be burying the lead story here. Someone in France decided that something English represented a great civilisation. Of course the original was built over four thousand years ago, so it can’t be construed as a straight-on compliment. Wouldn’t be French if it were.

We would be content just to post a life-sized partial Stonehenge replica made of citrus, but there’s more. Oh, yes, my friends–your eyes do not deceive you, as much as you may wish they did. That is indeed none other than–a druid!!! Ya gotta love it. (these two photos courtesy of the carpe annum blog. Many thanks to them!) Clearly the message that druids did not build Stonehenge has not gotten through to people worldwide just yet. They did do a nice job on it, though, didn’t they? We wonder who got to keep that druid.

As to scoring, we are looking at a surprisingly well put together partial Stonehenge. The replica includes the three-lintel stretch from the outer circle, a slightly larger trilithon from the inner horseshoe, some bluestones, and what appears to be an altar stone. Someone also took time to give appropriately uneven shapes to the “sarsens”.  Considerable care and observation went into this. Well done. Score: 7 druids! We are even considering adding another half druid for the wackiness of it all. But they do have a druid already, don’t they?

Our thanks to friend-of-the-blog David Raven of Elmet Garden Services in West Yorkshire.  Thank you, David!  He’s very good with plants, everyone, and we encourage you to hire him to work the garden. A man in touch with the spirit of the land.

And until next time, folks, happy henging! 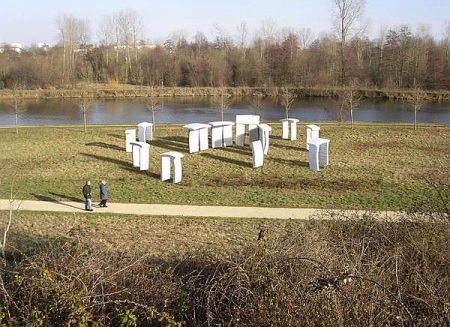 Looks real, doesn’t it, until you stop and think about how those skinny mattresses are standing by themselves. It was a thought while doing housework: beds are rectangular–there has to be a bedhenge. And there it was, on the first page of the search. When we asked to post the picture, Monsieur Fouet, the impudent Frenchman said, “Well, Yes, You can use my stuff for your fetishist Henge web site 🙂 , no problem.” Ouais? Eh bien, merci, mon petit chou!

But then he emailed again, telling us what we should have known– that this arrangement of mattresses is virtual, existing only on computers. So should we post it? Well, why not? We haven’t had a French one yet. There’s something about beds in a park that seems so very French. And we must say that the shadows of the mattresses are nicely done.

You can see another construction, named Document but nick-named Mattresshenge, in the fifth picture down on this page. Nice, but not meant as a Stonehenge replica. It was the only other thing we could find.

So what about the image above? It is almost all trilithons, understandable but not optimal. Perhaps the most surprising thing about it is his inclusion of the center trilithon horseshoe, which seems to be taller than the others, just  as in the original.

Score? We give it 5 druids. Let us know, Sebastien, if you ever get your project off the ground. [How does that idiom read on Google Translate?!]

Oh, yeah, we almost forgot–Yarr, mateys. Shiver me timbers. Avast ye scallywags. And the like. Happy Talk Like a Pirate Day, a bit late!