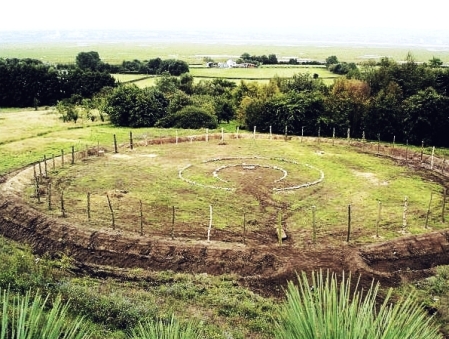 photo from John Hill’s article on the Antiquity website, with permission

We had this bookmarked for quite a while, uncertain whether it belonged on the blog, but then a friend of Clonehenge (Mr. P.G.) sent us the link asking if we’d done it yet, so here it is. Last year, 2008, Liverpool was designated European Capital of Culture by the European Union. As a contribution toward that, John Hill and others from the University of Liverpool by a very simple method including a rope, simple counting and the sun’s shadow, laid out the pattern of positions that would be necessary for a model of Stonehenge.

They then measured out a smaller pattern to suit the site and proceeded to dig a ditch and bank and mark the sites of the Aubrey holes. You can see a diagram of this stage of the original Stonehenge here. A fuller explanation of what Hill and the others did can be read in the article we mentioned. You can see the result above.

This construction certainly qualifies to be posted on Clonehenge, going by Rule Number 6 of our Rules of Henginess,  and is in fact the first henge to qualify on that basis alone. A Stonehenge replica without uprights or trilithons–we were waiting for this. Well done! They placed the earthen bank on the inside of the ditch, too, another distinctive feature of Stonehenge, as other henges tend to have the ditch on the inside.

These things may seem minor, but they are pleasing to find in a world where one trilithon of anything is called a henge.  This is a true Stonehenge replica, a replica of the developmental phase of Stonehenge called Stonehenge 1 (the phases are described on this Wikipedia page).

So how do we score this? We haven’t even found anything to mock or be silly about, but we don’t deduct points for that, tempting as it might be. Score: 8 druids. Because if druids had been involved in building Stonehenge instead of coming at least a millennium later, this is very much like what they would have built at this stage.The article points up that even the astronomy and celestial/landscape relationship have been painstakingly provided for.

What more could we ask? Well, there’s the question of ambiance. The spot is perfect for what its creators were doing, but here at Clonehenge, Stonehenge is not just a work of engineering and astronomical precision. We have learned that some people see it as sculpture, some people see it as a sacred site, and many people regard it with awe. (Let’s face it–gigantic looming stones–ftw!*) If Stonehenge looked like this, there wouldn’t be so many replicas and we wouldn’t be talking here, but this is brilliant and we will add it to our list of large permanent replicas!

*(we mean that to stand for for the win, not free the whales, or f*** the world, which would be, well–sort of humourous in that sentence, actually, now we think of it . . .) 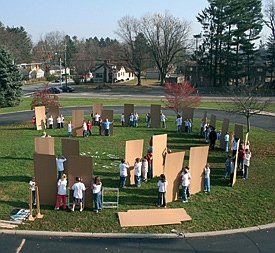 It’s a big week for the Newark Earthworks Center in Newark, Ohio. A pilgrimage (Walk with the Ancients) is taking place along a long-lost 60 mile road that runs straight as an arrow across the Ohio landscape, to end at the Newark Earthworks, the largest geometric earthworks complex in the world, with a day of celebration. We’re so glad to see this amazing site and its native builders getting notice. We lived there for a short time 20 years ago and couldn’t believe it wasn’t internationally famous. Maybe its time has come. 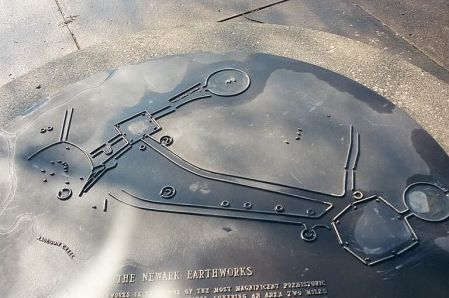 (our own photo–please ask permission) This is a partial map of the original earthworks at Newark, Ohio. The Great Circle is in the center at the top.

So how can that tie in with Stonehenge replicas? It’s more likely than you think! And that is because of one Ray Picton, whose Newark/Stonehenge story can be seen here. He wound up in a Fulbright teacher exchange that took him from Salisbury, England to Newark Ohio. Inspired by Stonehenge and the amazing site at Newark, he and his exchange teacher had their primary school classes do comparative studies of the sites. And of course for the classes in Ohio this inevitably meant Stonehenge replicas.

Apparently many were made, but we could only find photos of this unique effort in which students went out o the lawn with large pieces of cardboard and created a Stonehenge replica formation. (Why couldn’t we have done things like this when we were in school?!!!?) Needless to say we love Mr. Picton’s picture at the top. What a great effort!

The Ohio students became more aware of the significance of the site in their own community. Meanwhile children in Salisbury, too, were learning about the amazing earthworks at Newark as well as their own great monument.

Having been at Stonehenge and Avebury and Newark, we can tell you that there is a striking simlarity especially between Avebury and one part of the Newark complex called the Great Circle. In fact the Great Circle qualifies as a henge in the strict sense, which involves ditches and banks rather than stones. It’s not as large as Avebury, of course, but it is a sizable circle with a mound in the middle, presumably for ceremony. When we lived there, native wildflowers bloomed on the grounds within the circle in  spring.

We heartily applaud Mr. Picton’s successful efforts “to embed the comparative study of the two sites into the curriculum at both schools.” This shows what a difference one person can make. And we cannot leave the topic of the Newark Earthworks without mentioning Dr. Brad Lepper who has been involved at Newark since we lived there and heard him speak many years ago.  It is largely by his work that the road of pilgrimage being walked this week was discovered.

Score? Are you kidding? We award the rare 9 druids to this living Stonehenge made of cardboard and children. We know that in recent news people have been complaining that some awards are given undeservedly, but we think that work that gives hope and paints a better future for our children deserves the highest rewards of all!

P.S.: Newark Earthworks Day is this Saturday, October 17, 2009. If you can be there, we highly recommend it!

photo from Cheri at the Raven Hill Discovery Center, used with permission
(Stonehenge replica on the left and moai on the far right.)

“At present our Stonehenge replica contains just the ‘bluestones’ of Stonehenge,”  a note from Raven Hill tells us. Although it may look like a simple stone circle, great care has gone into stone placement, and the heel stone, altar stone and inner horseshoe are all represented.

It is part of the 30-acre Ancient World section of RHDC, which includes this Stonehenge, a Mayan ball court, an obelisk, a house foundation as from Skara Brae, and other things including–but of course!–a moai, or Easter Island head.

Now normally we lightly mock the moai/Stonehenge combination, using the penguin/polar bear analogy used here before, but we will cut Raven Hill some slack. We know it isn’t easy to attract the attention of the young. You might say Stonehenge and the moai are the Brad Pitt and Angelina Jolie of stone monuments. If you’re trying to reach kids, what could be better than putting both on the cover of your magazine, so to speak?* And including Skara Brae is a point in their favour!

Score: 5½ druids for the care and knowledge that went into this replica, despite no trilithons or ditch and bank. Raven Hill looks like an excellent place for a family day or several family days a year. See the comments for more info on this interesting and informative place!

*This does not let other Stonehenge/moai combiners off the hook. Sorry!