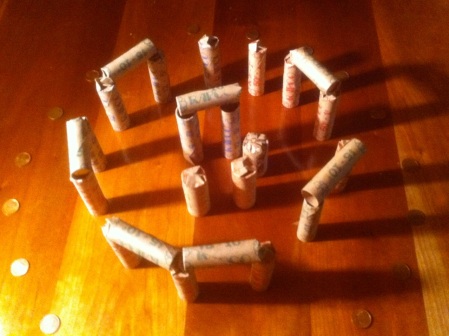 Just sent in yesterday by friend of the blog John Shaw-Rimmington, the thinking stone man, dry stone walling genius, and blogger at Thinking With My Hands. You see, in the US and Canada banks hand out these variously-sized paper tubes to people who have large amounts of loose coin. The coin owner then fills the tubes with the correct sized coins. A roll of nickels, for example, is $2.00. A roll of pennies is 50 cents, and so on.

Mr. Shaw-Rimmington (you may remember his name from a strawhenge we posted some time ago) says on his blog (since none of you ever clicks links):

“My daughter has been collecting lots of her ( and ours, that we lent her ) change over the last few years and yesterday she wrapped it all. She thinks it’s hers now.

The brown paper tubes when they’re neatly packed are remarkably heavy and feel like they want to be stacked somehow.

So I made a little free-standing coin circle. Or would that be a high priced one?

I will call it Coinhenge perhaps? I think that I had the Clonehenge site in mind when I made it.” See how he added that bit about us in order to avoid being castigated for his terrible puns?

He goes on: “It’s not in mint condition I know but it still might be worth depositing inside a bank (a kind of monetary earthworks site?) I wonder if the early builders of any kind of similar coinhenge ever ‘with-druid’ when ancient times got tough?”

Aargh! *strangled groan* The bun is the lowest form of wheat, if you get our drift. However this is the perfect henge for these times of change. Hurhur. We award it 6 druids, one whole druid of which is due strictly to John’s longstanding friendship with this blog. Please, if anyone is considering hiring him to do drystone work, we assure you that his expertise and art in that field are far superior to his pun-making and henging! He does beautiful work.