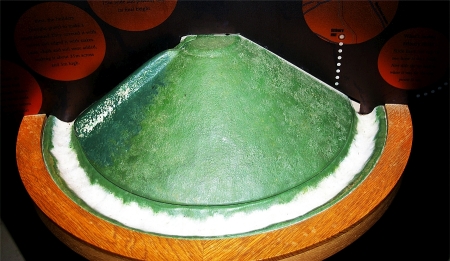 photo by Pete Glastonbury, with permission

At the same Barn Gallery in Avebury that we mentioned in this post, friend of the blog and finder of obscurities Pete G. found this solo replica of Silbury Hill. As far as we can tell, the cirular plaques around it explain the stages by which the mound was made.

We post this as part of this series of museum replicas we’ve been posting, most of them having to do with the greater Avebury landscape. We have a fond place in our hearts for Silbury because when we visited in  1972 we tried to run all the way up it. (Do not do this–it is not allowed, nor should it be, and we apologise. We were young . . . sigh)

This is a very nice replica, probably in better shape than the hill itself at this point. We won’t score it, though. The druid thing seems funny in connection with Avebury and Stonehenge, but just seems stupid in the face of Silbury’s potent form. 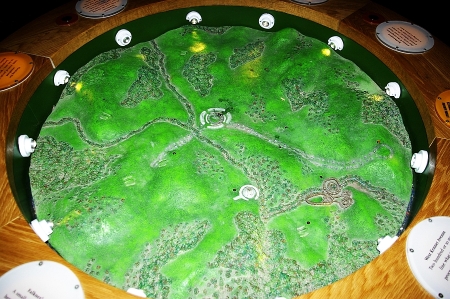 photo by Pete Glastonbury, with permission

Perhaps this is the ultimate Avebury replica. Housed in the National Trust’s Barn Gallery, associated with the Alexander Keiller Museum which we mentioned once before, this Avebury replica has all the bells and whistles–or at least all the buttons and LEDs. Buttons by the information plaques around the edge turn on the lights by the features they describe.

And what an array of features! Pete Glastonbury tells us, “The model has a complete Avebury, Silbury and Windmill Hill.It includes the following Longbarrows: Shelving stones, Horslip, Longstones, South Street and West Kennet. It even includes the wooden Palisade Enclosure and Falkners stone circle near the West Kennet Avenue..” At long last, the Avebury replica with everything our greedy hearts could desire!

Avebury is that obvious circle in the middle of the model above, and Silbury Hill is the white bump. The long barrows are the odd green hot-dog-in-roll things scattered about. Windmill Hill is in the upper left and the palisaded enclosures are in the lower right. This truly gives a sense of the Avebury landscape. All of the ancient stone circles and henges are better understood in their landscape context.

This is, as photographer Pete Glastonbury says, The Big One. Score: 9 druids. We can’t even think of anything funny to say!