photos by Gary of @Avebury_News, the guide coordinator at Avebury NT, used with permission

This is just a small supplement to our post of February 11, More Old Film: Model of an Avebury Stone. Friend of the blog, Gary of @Avebury_News on Twitter, posted these photos of the stone we featured in that post. The photos in the last post were taken in 1955. These were taken fifty-five years later.

This now venerable display has educated generations of children and adults. As @Avebury_News said, “The model depicts how they believe the Avebury, and I guess Stonehenge, stones were potted.” By which we suppose he means set in the ground.

It is fascinating to see that, while the supporting poles do seem to have been moved, and the little antler replicas have disappeared, it looks as if the twine or string remains exactly as it was fifty-five years ago! You may well say, Why not?, but it seems to us somehow remarkable and wonderful, this sturdy stone somehow chosen to be a teacher while its fellows stay out on the landscape ignored, and this twine, probably wrapped in a moment or two by a museum worker, still just as it was. 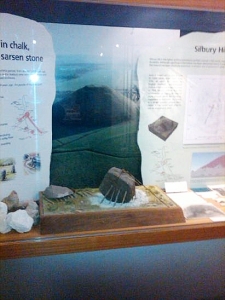 The whole thing plays in to the timelessness of the larger site around it. We’re charmed! The stone was no doubt chosen to represent the lozenge-shaped stones, thought perhaps to represent the feminine principle. And there behind it is the beautiful, mystical (at least to us) Silbury Hill, like the umbilicus some believe it to have represented.

[This display can be found in the Stables Gallery of the Alexander Keiller Museum in Avebury, Wiltshire, UK, home of the largest stone circle in the world. In case you just stumbled on us now. (Do try to keep up!)]

And to all of our readers, happy henging!