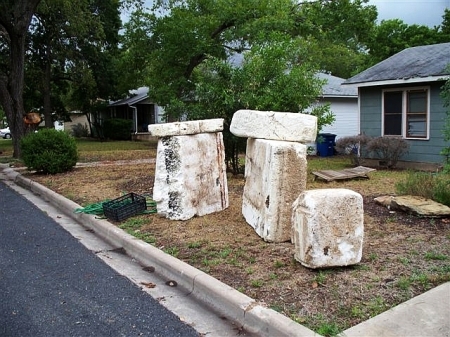 An advertisement on Craig’s List in Austin yesterday read, “Stonehenge in Austin!!!! Large blocks of boat dock Styrofoam ready for creation of the New Druid sanctuary. OR you could saw it into 3.5″ slices and use it to insulate your garage wall like I did.”and later, “Free at the Curb [address removed] Disturbing the High Council with electronic wizardry signals or rapping upon the Great Hall Door will bring Great Shame to you and your Steeds!!! Gollum and the Castle Hounds will be pissed too!!! :)~  Oh, some garden hose is there too.”

It was accompanied by the photo above. Since then, we are informed, someone picked up the styrofoam to use as a waterfall. (Not sure how that works, but whatever.) The henger and photographer tells us, “I made this “Foamhenge” to summon the forces of the Druids to influence the global economy. I also used sections of these blocks to insulate my 1951 garage as a way to promote recycle and re-use.. . . Mostly, I am cleaning up my yard!!!!”

Well, we say if you’re cleaning up your place anyway, why not petition the Old Gods while you do it? It can’t do any harm and who knows–it might help. We’re kind of sorry we never see temporary styrofoam Stonehenges when we drive through our nearby suburban areas. But then we don’t have the motto this city does: “Keep Austin Weird!” Looks like Mr. Jarrett is just doing his part!

Do we score this ephemeral offering? No–for one thing we can’t tell if those are trilithons or just blocks with hats. And why ruin a fun thing with a score that to be fair would have to be low? Any druids have already dispersed. Let’s just enjoy it for what it was!