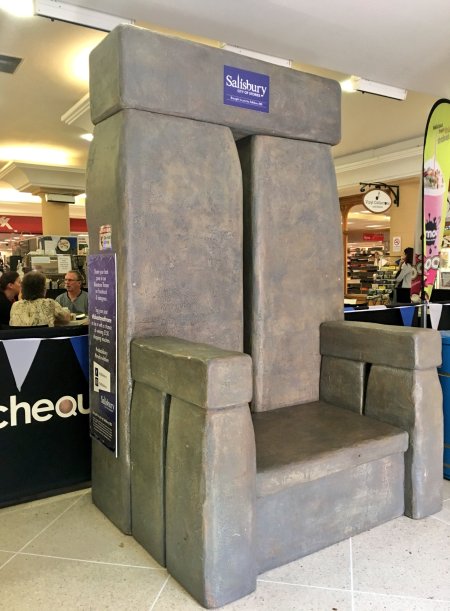 The so-called Bluestone Throne, as posted by Cross Keys Arcade on Twitter

Just feast your eyes. We love this!

The “Bluestone Throne”, as seen above, is a marketing aid for the cathedral city of Salisbury in Wiltshire, the county of the U.K. that is (blessed with? burdened with? guilty of?) Stonehenge. Cleverly made from wood by a local craftsman, it is painted to resemble stone, not actually the famous bluestones, but the equally famous sarsen trilithons that are so emblematic of the ancient heap of rocks we keep talking about here.

The back of the throne is made to look like one huge trilithon and the seat’s arms are made up of two smaller trilithons. The proportions and the stone shapes echo those of the real monument, which may not sound like much but is actually quite unusual when it comes to Stonehenge replicas. We applaud the efforts at making it look real.

And the idea is clever, isn’t it? We think some smart entrepreneur should use this design and create inflatable thrones to sell for sitting in the back garden or by the seashore. How glorious! 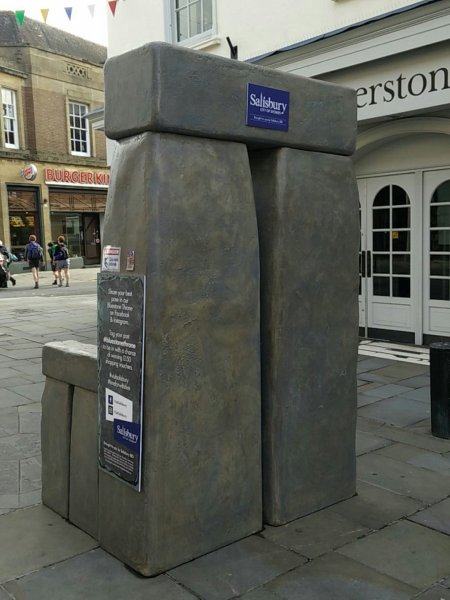 From the back. Photo by @cgiAlexis

Are we still giving tongue-in-cheek Druid ratings on this long-neglected blog? If so, we grant this a solid 8 druids, which is very good for something that doesn’t even form a circle. But it is surely in the Clonehenge tradition—a bit humourous, almost a cheeky (Oh gosh! We’re going to pretend that pun was intended!) thing to do with the idea of the world-renowned monument of mystery and wonder we all know so well. And we like it all the more for being named Bluestone Throne when there is nothing resembling a bluestone in it! Just the sort of thing that delights us.

The selfie-friendly seat will be placed in different spots around Salisbury over the coming weeks, then tucked away over the winter, and if it is popular enough, brought back out for next year! So please, we beg you, make sure it’s popular so we can see it again, or, alternatively, have it sent to us at the end of the season, for us to put in the front garden. Wouldn’t the neighbours talk!

So get thee to Salisbury to sit on the stoney throne. We have a list of people we would love to see in it. Feel free to post Bluestone Throne selfies on our Facebook Group, or tweet them to @Clonehenge on Twitter. And until next time, kind friends, happy henging!

One thought on “The Bluestone Throne: Have a Seat Among the Trilithons!”