That is how the fateful tweet from @MarsCuriosity started. It continued:  See the tiny cluster of rocks, aka “Stonehenge,” I’ve been investigating with my laser. 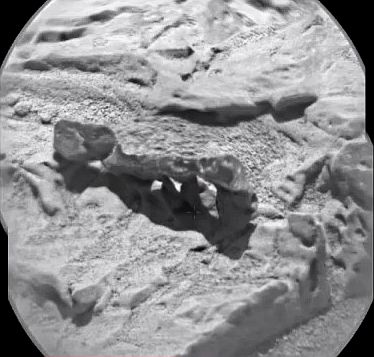 And here at Clonehenge headquarters, the whole office said in chorus, “Say what?!” Everyone went for the View Media button at once to see the video (above), and watched fascinated as the brilliant and lovely Nina Lanza gave her talk (transcribed here). We saw the tiny stone and the weathering under it that made it look as if it were set on little uprights, like a tiny row of sarsens topped with lintels, ON MARS!!!* And we heard how the Curiosity Rover zapped it with its lasers nine times.

We were laughing and exchanging looks of bemused joy when, well, as they say, s#!* got real. Miss Lanza went on to say, In addition to composition, we’ve also been able to make a three-dimensional model of the surface of this target using images from the Remote Micro-Imager part of ChemCam. (see model below) 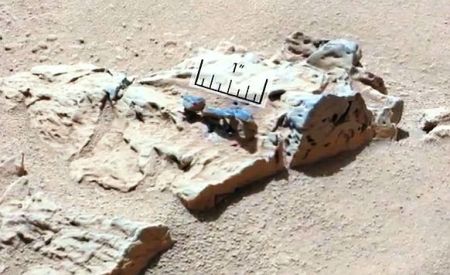 So, I guess we all know what this means. No? Not All? What about Giorgio Tsoukalos? We think he’d know what to say. Yes, that’s right, gentle readers, apparently Mars people must be very very small! And we just zapped their pagan ritual site! We believe they are planning their revenge.

But here at Clonehenge, we say, “What? Us worry?” We’re too thrilled to see Stonehenge, however dubious the connection, and a model of it, mentioned in connection with space! We still hope someday to learn of a Stonehenge replica being made on the International Space Station, but until then, this is making us pretty darned happy! Thank you, Curiosity Rover! Thank you, Nina Lanza! Thank you, other NASA dudes and dudettes!

And until next time, we wish all of you, including the NASA computers, happy henging!!

*Try adding that to every fortune cookie you open!

2 thoughts on “Stonehenge Replica on Mars!!! (not really, but who could resist that title?)”