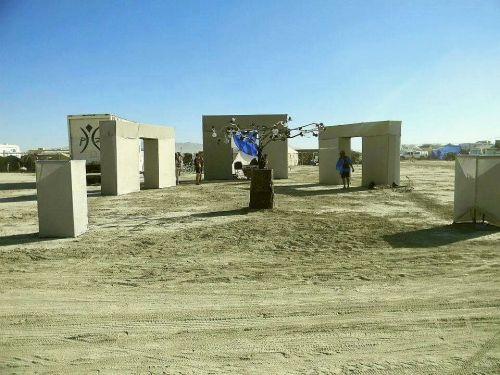 BASShenge at the Burning Man Festival, 2012

Way back in January (remember January?) we did a post about some people who were collecting money in order to build a Stonehenge replica at Burning Man: not just any Stonehenge replica, but one made of bass speakers, making it rather reminiscent of the Solhenge made of speakers at the 2004 Burning Man Festival. Well, here it is!

The proportions, height to width, are not bad. It looks as if they chose to reproduce only the center trilithon horseshoe of Stonehenge, changing the trilithons at either end of the horseshoe to monoliths. A sequence of pictures including the building of the henge can be seen here.

Score? 6 druids for these guys! This took some planning and team work, and looks enough like Stonehenge to pass, and we are told that they did align it to the sun and moon, although we have no details on that.

Some research suggests that music may have been among the uses for the real Stonehenge in its heyday. We like potential links to the builders and ancient visitors to Stonehenge. It is possible that a number of things that go on at Burning Man might have been recognisable to pilgrims and celebrant on Salisbury Plain thousands of years ago! Well done, Burners!

Now to the bigger question. Why does Burning Man generate so many Stonehenge replicas? Why, in fact, do festivals in general breed Stonehenge replicas at a fair rate? We are reminded not only of the many Burning Man replicas (mentioned here and here in a list that is probably not comprehensive), but also replicas including the one at the Audio Soup Festival, one at the Elf Fantasy Fair in 2008, and one at Ireland’s Oxegen Music Festival in 2009. It seems that the Mutoid Waste Company has set up a few henges at festivals, there are Hugh Jart’s Dubhenge and Banksy’s Privy Henge, both of which showed up at the Glastonbury Festival on, different years, and of course the wonderful Citrus-Henge at the lemon festival in the Riviera one year!

If we were to pursue the idea (which we in fact just made up) that the original uses of Stonehenge itself are the most likely situations to generate replicas now, then festivals obviously should be generating these henges, since evidence of gathering and feasting has been found in excavations near Stonehenge. One must beware, however, of reversing that idea to suggest that things that now generate replicas must be original uses for Stonehenge, unless one is prepared to assert that crazy golf was common in the Neolithic. Before we would assert that we would have to have an awful lot of that stuff that gets passed around at Burning Man!*

Music, festive gatherings, feasting, observing the heavens, time measurement, healing, intoxication, mysticism, and sport, all of these ancient pursuits and more have connections to modern Stonehenge replicas. When people build these things, maybe they are getting in touch with their ancestors even as they laugh and joke about it, getting in touch with those things that, despite huge changes, have remained the same.

Something to think about, or drink to! Until next time, friends, happy henging!

*Or maybe just a lot of mead. Recently someone suggested to us that Stonehenge was a huge tavern. The alcohol connection, which we have pointed out in the past.