“The idea for this work started when I saw an aerial picture of Stonehenge and noticed that the parking space is bigger than the monument itself. Tourist-horror!”

Bethany de Forest (lovely name!), the pinhole photography artist who made this nicely rendered model, is not the first person to notice the problem with the Stonehenge landscape as it stands today. English Heritage (EH) itself says, “The dignity of Stonehenge is severely compromised.” (more on this below)

But while EH has dithered, with frequent changes of status for the project of building the new visitors’ center and altering the landscape, Ms. de Forest has gone ahead, as artists will, and created engaging art from the cognitive dissonance between the tacky car park and related facilities on one hand, and the ancient and mystical world treasure that is Stonehenge on the other. 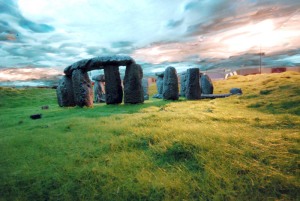 What is the question we’re waiting for, class? Yes, you over there in the “Give Me That Old Time Religion” t-shirt with a picture of people dancing around Stonehenge–Very good. The question is, what is pinhole photography? You can find a very thoughtful explanation by Bethany de Forest here. Or you can read ours as follows: Well, you kind of like, stick a hole in something, ya know? And then ya like put it in a little box, then make a little model, then you, like, let the light in or whatever. And then it looks like Stonehenge. Or, like, whatever, ya know?

We’re thinking of going into technical writing. Ms. de Forest (no relation to Bones from Star Trek) tells us of this particular model, “The model is made in a mirror-box of about 150x150m in contour. Materials I used for my Stonehenge are Styrofoam, flock-grass, sand mixed with wood glue, led-lights, model cars. cotton wool and color foils (for the sky).”

We’re pretty certain that 150x150m measurement was a typo, but then her website does say that, “Being a pinhole photographer, Bethany’s view of the world is quite deformed.” AND she lives in Amsterdam, so all bets are off.

The picture at the top is the finished product, but we like all of the pictures on her Stonehenge page. Her process is fascinating. (Read this and you’ll see!) This is one our favourite small Stonehenge models of all time. She may not have included details like the ditch and bank, but she makes up for it with the car park. And the Stonehenge itself has the feel of accuracy and that grey huddled look that so few hengers manage. She has captured or rather conjured an indescribable feeling in the final work. Score: 7½ druids! (See the comments for Simon’s appropriate suggestion on scoring.)

As for English Heritage, the proposals given on their site for returning to Stonehenge some of its dignity sound brilliant, in our not-nearly-as-humble-as-it-should-be opinion. That nearby overly-large car park would be gone. Whether any of those changes ever happen is another matter. We got stuck in buffering limbo just trying to see the last 30 seconds of the EH video on that page. It may be an omen.

Someone said to us that as December 21, 2012 approaches, more and more people will be compulsively building Stonehenges. Apparently it has to do with vibes coming out of the earth and others reflecting back from the future or something. We don’t understand all of that, but we warn everyone to remain alert. The Stonehenge brain virus is pandemic, and so far the medical profession is treating it as if it is a tick disease, by which we mean ignoring it altogether. No one is safe.

But if it should get to you, then we wish you, until next time, happy henging! (And send pictures!)

2 thoughts on “Pinhole Stonehenge Model: It’s All About The Car Park”