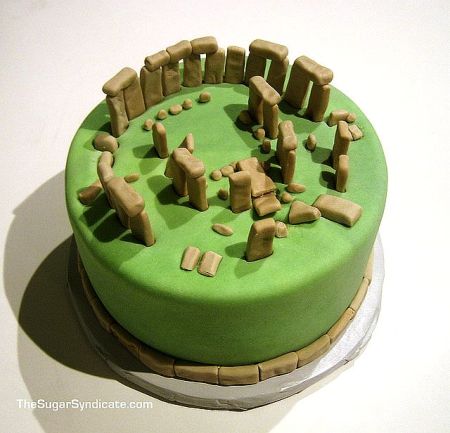 photo from TheSugarSyndicate.com’s Flickr account
Believe it or not, we are swamped with new Stonehenge replicas of all sorts and you might think, if you were not in possession of all the facts, that we should be posting here at least a couple of times per week, if not every day. You could be forgiven for assuming we are just lazy.

But nothing could be further from the truth! What people don’t realise is that unlike other bloggers, who just use mass-produced letters and words, often imported from countries where they have been grown with pesticides by people who are paid sub-subsistence wages and who have no access to health care despite their crippling work, here at Clonehenge we personally grow every letter and every word ourselves, nurturing them with great care and at much expense.

This labour of love gives us precious little time for the fun of producing these posts for our adoring public, but because we know you are waiting breathlessly we tear ourselves away from the Palabra beanfields to craft these posts like drystone walls, turning and fitting each word and each letter until somehow they fit and balance to make the august edifice that is Clonehenge.

Today our topic is Stonehenge cakes, or cakehenges. The example above, beautifully done, was the 2007 creation of a Chicago-based bakery, The Sugar Syndicate, which is, alas, no longer a going concern. It is an outstanding example of the cakehenge genre, second only to our favourite, the mom-made cakehenge from New Zealand’s Vanda Symon. 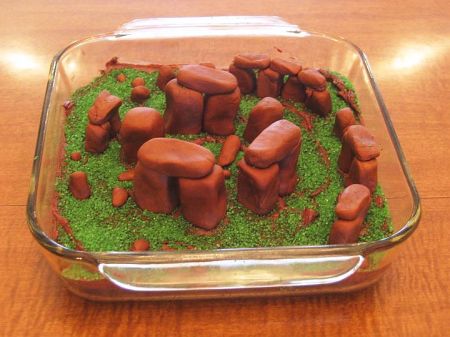 The confection in the pan above was posted on the Clonehenge Facebook page by reader Siobhan Jess Sarrel, about whom we know nothing, especially not how to pronounce her first name. She baked gluten-free brownies, used fondant to fashion the Stonehenge on top, and took it to a friend’s solstice party. (We do not know if Ms. Sarrel is in the northern or southern hemisphere, so we don’t know if it was a summer or winter solstice party.)

These henges have many things right with them. First, they are our preferred type–replicas of Stonehenge as it stands today. In both cases the builders looked at pictures of Stonehenge to guide their modeling. Both show the trilithon horseshoe and the three remaining adjacent lintels. Both show fallen stones.

The top cake is more accurate in scale and placement and also includes the bluestones. It is impeccable and professional looking. The brownies, on the other hand, are gluten-free.

This may not mean much to the average reader, but for us this is a huge factor. Not only are we at Clonehenge among those who are required for health reasons to eat gluten-free foods only, but it is a little-known fact that the original Stonehenge on Salisbury Plain IS IN FACT GLUTEN-FREE!!! Well caught, Lady S. J. Sarrel!

Scores? We give the Syndicate henge 7 ½ druids and Ms. Sarrel’s brownie henge a solid 7. We figure we don’t want to run afoul of any syndicate out of Chicago!

Well, it looks like we’ve just about run out of words that are developed enough to pick. We’ll have to let the fields grow a bit before we can post again. Here’s hoping the aliens don’t come by and ruin things with crop circles!

If you’re still hungry for cakehenges, find more here. And until next time, happy henging!

P.S.: What the hell is fondant, anyway? Yes, we know we could google it but the truth is we’re far too lazy. Oops.

One thought on “Cakehenges and Word Fields: the Plight of the Carbon-Conscious Blogger”