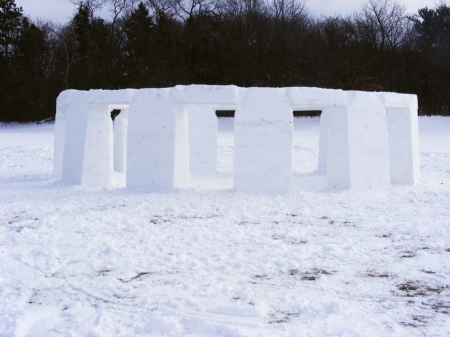 photo from the Snowhenge blog on Blogspot, used with permission

“The ancient DRUIDS did it with stone, the Michigan DRUIDS do it with snow.” So says the Snowhenge blog from which this picture came. We distinguish it from the blog of friend-of-Clonehenge David Mantripp at snowhenge dot net, who took the photo that marked our first posted snowhenge.

We’ve done several snowhenges since then and we’ve seen many more that never made it to our pages, but most of them have been from  places exotic, mainly Antarctica (here’s another, and another), where the Stonehenge-building field is strong and mankind cannot resist its power, and the even more exotic Bristol! This time our outstanding snowhenge is/was in humble Michigan.

Yes, Michigan is once more pushing to reclaim its briefly-held title of the Stonehenge State, after having it cruelly ripped from its claws by Washington State which no doubt wanted a name that people wouldn’t mistake for the national capital. To recap in case you’ve forgotten, Michigan is home to the little replica at Raven Hill Discovery Center, the all-over-the-web famous Wally Wallington’s Forgotten Technology henge (did he ever finish that thing?), and best of all, the beautiful Nunica Henge, in our opinion one of the finest ever made. Bravo, Michigan!

But alas, while this snowhenge is large, it is not a permanent replica. “Standing 6.5 feet tall and 30 feet in diameter and consisting of nearly 1000 cubic feet of packed snow, Snowhenge’s 12 pillars and 12 lintels are perfectly aligned astronomical markers. Looking directly through the hole in the center of pillar 3 soon after sunset on Winter Solstice extraordinarily reveals an almost equilateral triangle formed by the visible planets Saturn (left), Mars (top), and Venus (right). . . . Outside the circle, three pairs of standing snowmen show where the sun rises and sets for each of the solstices and equinoxes.”

Clearly a lot of thought and work have gone into this henge, and judging by the copy on the blog we would hazard a guess that a lot of intoxicating substance, liquid or of another variety, went into its builders! We have trouble believing that “Numerous consecutive years of record heat spikes in Perth, Australia are directly responsible for the extraordinary cold snaps at MacKay Jaycees Family Park which will amazingly keep Snowhenge frozen all year round.”

But if that should happen, we would definitely add this henge to our list of large permanent replicas. It wouldn’t tie Michigan with Washington State, but it would certainly put them in striking distance! Permafrost would be a small price to pay for a chance at the title!

Score: Well, our snowhenge scores have been all over the place so far, but we’ll give this one a solid 8 druids. Why, if there’s no bluestone circle, no trilithon horseshoe, no ditch and bank?! It’s their prose, I’m afraid. Stupid silliness, as some have experienced, is the way to our hearts and our carefully-meted-out druids. And look at their closing line: “No matter the medium, the DRUIDS purpose remains the same – do it bigger, live it larger, play it harder, have some fun.” Hard to argue with that!

Our thanks to the illustrious Andy Burnham of the Megalithic Portal, who sent this our way, and to Peter Salisbury who gave the permissions. Happy henging!