photos are stills from this clip posted on TCM 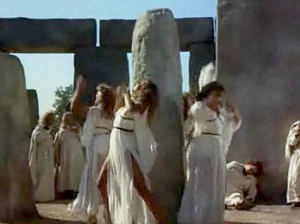 We were going to do one post listing all the movies we know of so far that contain Stonehenge in some form. We’d already posted the movies This Is Spinal Tap and The Colour of Magic, and we thought we could round up the ones that were left in one quick post. Then we watched this video again. Lolz!!!1! It deserves a post of its own!

A synopsis of this section of the movie (from a full synopsis on this page) reads: “John, as the Black Knight, rides off to summon Arthur’s knights, as Linet, the abbot and the remaining monks are taken by the Vikings to the mysterious rocks of Stonehenge, where they are readied as sacrifice. Arthur, John and the knights arrive in time to rescue Linet and the clergymen and destroy Stonehenge.” But, trust us, this does not capture the madness of the wildly dancing girls, the heavily made-up so-called virgin about to be sacrificed, and the wild priests or druids presiding over it, let alone the dramatic rescue of said virgin and the about-to be roasted monks. Don’t you just hate those evil pagans?! 😉

Then, of course, there’s the pulling down of the stones at the end of the sequence. They come down quite easily,  pulled by knights on horses.  Think how that would have impacted on Britain’s tourist trade! Reminds us of National Lampoon’s European Vacation in which Chevy Chase backs into one trilithon and the whole thing goes down like dominoes. D***ed Americans!! 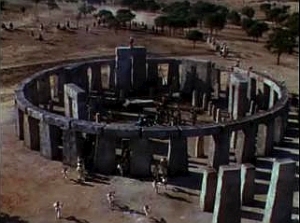 Score for this replica: 7½ druids. We think they did a fine job of mocking up what Stonehenge might have looked like long ago, considering it was 1954. As a matter of fact, we think they may have used the Maryhill replica (see here for our post on that one) for this aerial shot and just mocked up the parts they needed for the close-ups. Still, nicely done.

Our thanks to Bob Bradlee aka StonehengeGuy for steering us to this classic Stonehenge depiction. It is good to laugh!

5 thoughts on “Another Movie Replica: The Black Knight, 1954”